A 40 years old woman by the name of Vida Ajin has been arrested by the Police at Nsawam for involving in a robbery attack. The said robbery attack occurred in Dobrokrom, a suburb of Nsawam. Vida planned to rob her husband, Maxwell after he refused to give her some money.

Vida had planned to travel outside of the country on 28th January and she asked her husband to give her an amount of GHC 8000 for her travel plans. Maxwell insisted that Vida tells him about her plans else he would not give her the money. Vida through an old classmate of hers, Peter Aboagye had secured a VISA to the USA and all that was left was money to buy a plane ticket. 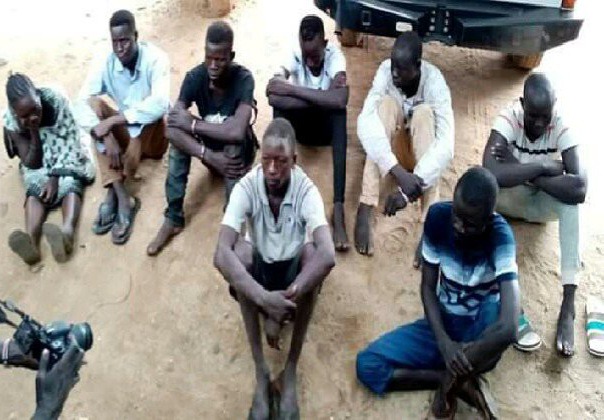 Her flight which was first scheduled on 4th January had to be cancelled because of inadequate funds. That was what pushed her to inform her husband about her travel plans. Maxwell because he was not aware of his wife's plans, refused to support her. Vida's family even called Maxwell to plead on her behalf for him to release the money.

The family later went to Maxwell's house to plead again but this time around, he refused the money and declared that his marriage to Vida was over because she did not think about her husband and children before making those plans. Vida arranged with some young men in the area to help rob his husband.

She promised the men to bring them money and items from the USA if they helped her out. This gave the young men much assurance to rob Maxwell. But the young men said they did not know it was her husband they were going to rob. Maxwell is a cement and iron rods trader. He was attacked after he had closed from work by seven robbers who took away all the money he had made that day which was a total of GHC 12,194.

Maxwell reported to the Policemen at Nsawam who arrested all seven of the robbers. The leader of the robbery gang, Philip Achiaw revealed to the Police that Vida was the mastermind behind the operation which led to her arrest. Vida and the seven men will be facing Nsawam District Court 1 for robing her husband of GHC 12,194.

Find Out Why Ladies Should Feed Their Lovers With Beetroot

Black Sherif Gets Arrested By The Police In Latest Video Released Today.