A Man At Agona Has Brutally Beaten His Wife Over A Land She Sold For This Price. Read Details.

By Ghana_Morning_News (self media writer) | 10 months ago

A man at Agona has brutally beaten his wife over a plot of land she sold for this price. Read details. This news was reported by "Western Media" on Facebook today, 21 July, 2021. Read details below.

A Man At Agona Has Brutally Beaten His Wife Over A Land She Sold For This Price. Read Details.

"Agya Kwakye is a retired Economics teacher at one of the senior high schools in the Western Region, who taught for twenty-three years. Agya Kwakye was born on May 16, 1955, and he is sixty-six years old. Agya Kwakye is from the Ashanti tribe but stays at Agona, in the Ahanta West Municipal. Agya Kwakye got married to Maame Sarpongmaa in 1985, and has four children. Prince, Oliver, Sandra, and Juliana are his children. Agya Kwakye and his wife have both lived happily an peacefully since they got married.

In 2013, Agya Kwakye bought a plot of land at Agona from his teaching salary. He bought the land at four thousand cedis, which is forty million in the Ghana's old currency. His purpose for buying that land is that, when he gets retired from the teaching profession, he can sell the land expensively so he can start a profitable business. Hopefully, Agya Kwakye got retired from teaching in 2020, at the age of sixty-five.

After retirement, Agya Kwakye is now ready to sell the land he bought in 2013, so he can start a benefiting business with the money. But on Monday, 19 July, 2021, Agya Kwakye's wife secretly sold his plot of land for a song (low price). Agya Kwakye's long time wife, known as Maame Sarpongmaa sold the plot of land for two thousand six hundred cedis, which is twenty-six million in the Ghana's old currency. But Agya Kwakye was informed by his relative yesterday, 20 July, 2021, that his wife has secretly sold his land for two thousand six hundred cedis. Agya Kwakye on hearing that, kept quiet until today.

Agya Kwakye became angry, and at his rage, he brutally beat his wife around 6:30am. Agya Kwakye beat his wife, where blood flowed out of her nostrils and the mouth. He beat his wife for long for long until some tenants rushed to the scene and rescued the wife. She got admitted at a nearby clinic. But Agya Kwakye, the retired Economics teacher at that moment took to his heels. Right now, Agya Kwakye is nowhere to be found in Agona, in the Ahanta West Municipal." 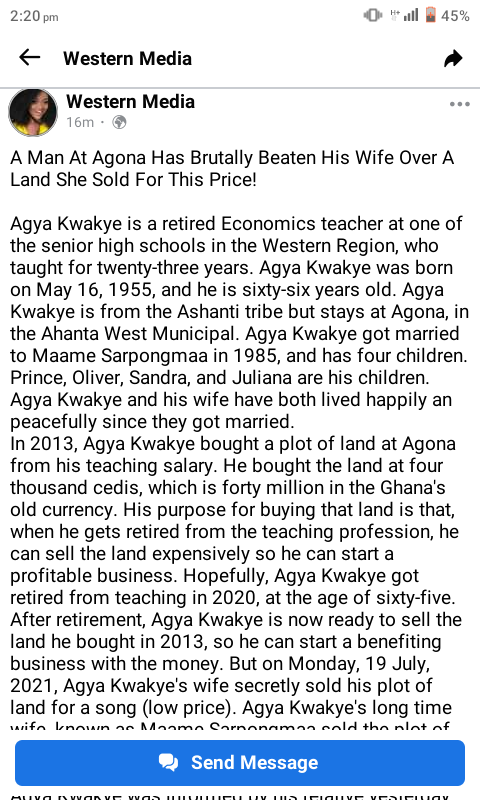 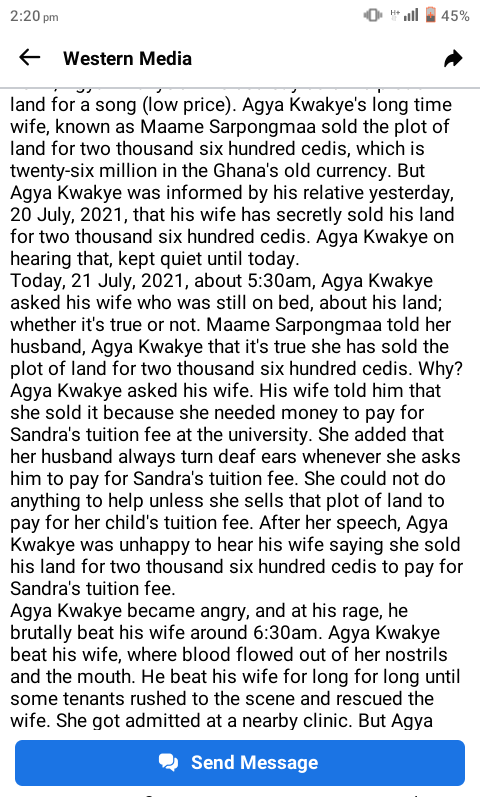 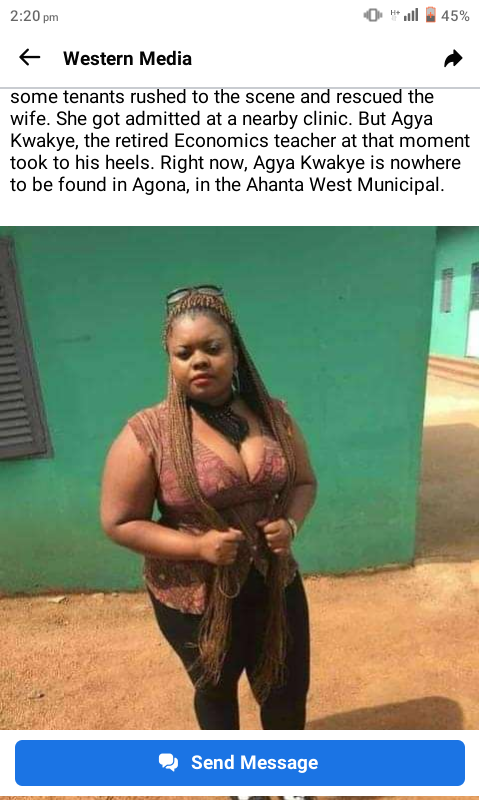 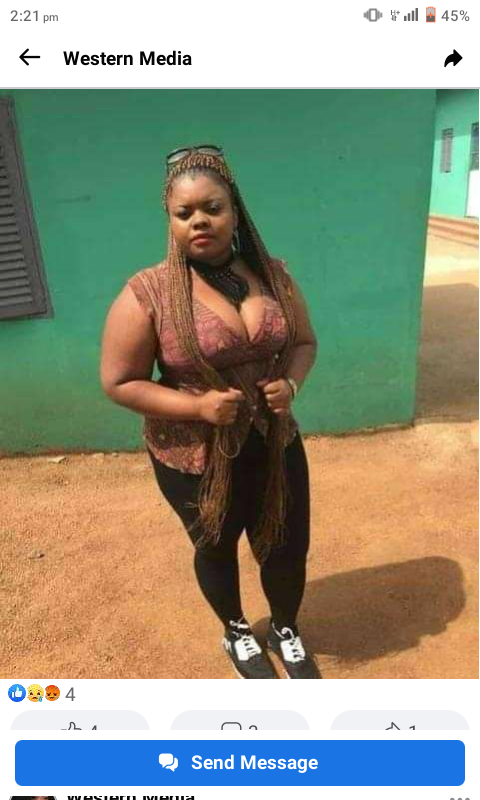 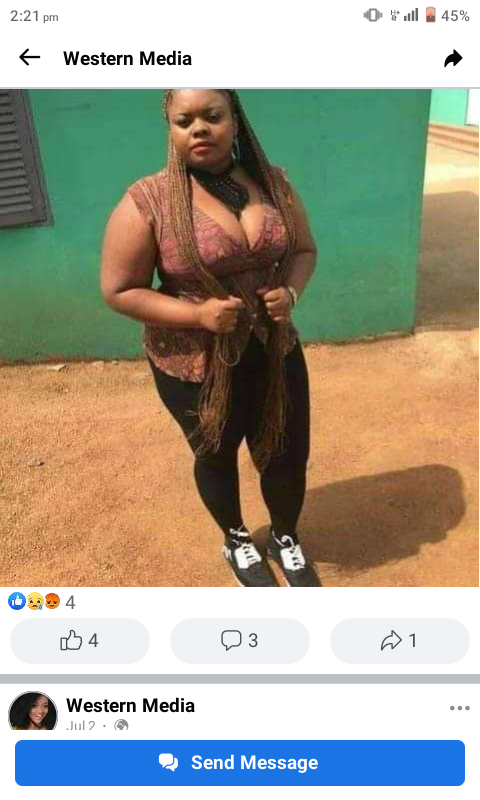 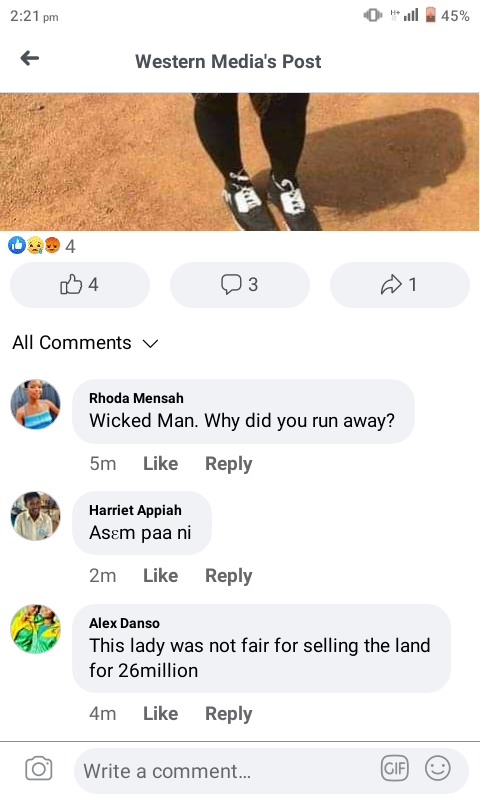 So the above news is the man at Agona who has brutally beaten his wife over a plot of land she sold for two thousand six hundred cedis.

Content created and supplied by: Ghana_Morning_News (via Opera News )