Revealed. NDC MP Recounts The Chilling Account That Led To His Accident. 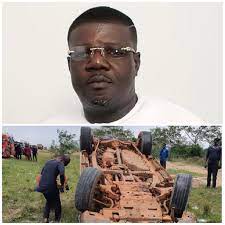 Not long ago, Member of Parliament (MP) for South Dayi, Rockson Dafeamekpor was involved in a gory road crash Aveyime road in the Volta Region when the M together with his colleagues where returning to Accra from the funeral of his colleague MP, Okudzeto Ablakwa. Today, he stormed Metro TV to confirm that he is well as well as narrate the events prior to the accident. Check out his narration.

"It was a harrowing experience. I left immediately after John Mahama left. I left quiet early because I had to appear at my mother-in-law's thanksgiving service the next day so I thought it wise to return to Accra early so that I will make it to the program as early as possible. I was returning with about five of my colleagues and the journey had been smooth until we got to Dawa, where your people have the film village and there was this Kia truck loaded with cement blocks, about 120. 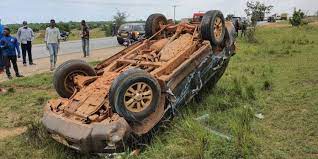 He had missed his way, that is the place where he as supposed to deliver the blocks. So apparently, he had parked and took a call for direction. So when he was told that the place he was lookin for was opposite where he had parked, he decided to do a U-Turn on the highway. And so, all we saw was that the driver was coming towards us. The way we were driving, if we had just entered the highway without seeing us, we would have avoided him because fortunately, there was no vehicle on the other side. With that, he was just coming. So I signaled my colleagues to slow down as I was driving ahead of them and I decided to avoid. I actually avoided him but somehow, he hit me and my car spun around two times and before I could realize, the car somersaulted and landed top down. Later, the Ashaiman MP pulled me out.", Rockson.