In central Liberia, a young woman, Patricia Samukai, listened to the voice of Pastor Paul Rica, titled "God's Eternal Judgment for Godly and Evil Youth," proclaimed to the audience over the radio.

Suddenly, a body of a snake jumped out of his head and started running towards the ground, but mysteriously vanished as people chased after him screaming to kill him.

His father, Sobbeh Samukai, put him on the motorbike and immediately went to the radio station to notify the pastor.

But when I got to the studio, they said it was a voice. They gave us the phone number and they called HOREMOW. Now they have given us a place to bond and he and his family are now all members of HOREMOW.

I am Brother Abel Gbieor from Liberia. At the 2021 International Conference on the Holiness of Women, Pastor Paul Rica testified about a snake coming out of the head of a haunted girl while listening to HOREMOW in Liberia.

I want to share my testimony as I did when interviewing a girl named Patricia and her father, Mr. Samuka, as district chief. The words of the apostle Paul Rika were broadcast on several radio stations in Liberia. This special event takes place outside of town. The radio station broadcast the message “God's judgment for youth and youth” there.

The family lives in a large apartment with a few tenants. The father and daughter are listening to the radio in the room, and a 13-14 year old girl does the laundry outside. The complex also has a few tenants.

The father testified that he knew his daughter Patricia was suffering from a spiritual problem due to the strange behavior and the circumstances surrounding her. Sometimes he finds himself in another world and hears strange voices talking to him.

He said that when he was young he told her about his strange experiences and he also promised that he would make her rich with his abilities. She prayed for his salvation and always cared for him.

So when there was a home radio, Patricia, who was doing laundry outside, decided to come closer to the house to hear the message clearly.

He testified that he was uncomfortable when he heard Pastor Paul Rica berating young men for their immorality. The people teaching him the instructions started warning him to leave the environment, but he ignored them and continued to listen to the message.

As I listened, a snake suddenly jumped out of my head and fell to the ground. At that time it was sent! The people in the garden who watched it screamed and ran to catch the snake, but the snake was gone.

My father used to say: “Snakes! Snake! "And she went out, and told him that a snake had come out of her daughter's head and killed her, and he went away.

When he asked his daughter what had happened, she said she was kicked out when she heard a man on the radio. The man immediately removed his motorcycle and took his daughter to the radio station.

When they arrived, the superintendent explained that the pastor was not present, only playing the notes on the memory card. They promised to connect with the people who took the message.

This is how they took them to HOREMOW Liberia and our country president, Pastor Matthew Zoga, taught us to follow them. I went there to work with Pastor Ernest Diallo, interview them and learn all about his salvation. Patricia confessed that she was possessed by a demon, but from that day on the demon left her and she confessed that she was totally saved. Heard the word while attending Church Winners, he was rescued and joined Hoamou.

The whole family joins HOREMOW and some neighbors. He transferred material to the Movement and now we have a branch in his house. 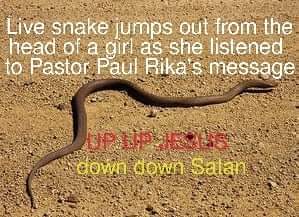 In the town of Gvanga in central Liberia, three demons from various realms appeared to have killed scores of people, including their father, as “Immortal Message from Hell” was broadcast on the radio. The demons who tormented the whole family were condemned and converted by the Lord when they heard the message. They took the sister's womb to the dark world and protected her from childbirth.

The sisters traveled through Liberia to Nigeria to find a solution, but that did not resolve it. Hearing the “Immortal Message from Hell,” all of our uncles began to confess and release all their loved ones and return the wombs of their sisters.

For this reason, the whole family and community are all here for HOREMOW now and they have become a place of brotherhood. The unnamed wizard named Pastor Paulica

As part of Bong Mine's missionary work in central Liberia, the words “God's eternal judgment on sin and sinners” have become popular.

A famous wizard who persecuted his sister at the approach of death, heard these words at home and repented.

Then he started to confess to the audience there, followed the source of the message to the place and said, “No! I don't want to go to hell. You must go to the sister and go to confession. In fact, he did as he was told and publicly repented of his magic.