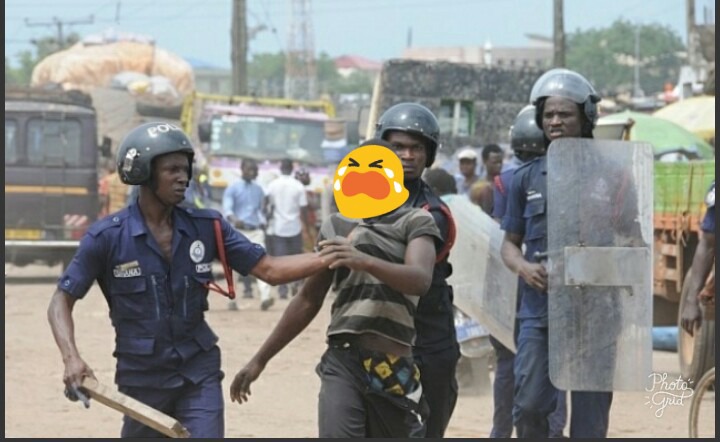 Whiles many are busy preparing for the festive occasion, others are hectically throwing punches in the air for unnecessary reasons. David Manu has been arrested at Asante Mampong for using his strength on a woman who asked about the health of her children. David who is temporary unemployed, allegedly called for the children of Maame Ataa.

The boys whose name I will withheld, was called by David on Wednesday 16 December to come and run errands for him. David took the boys who are 10-years and 7-years to his room and did what is supposed to happen between couples with both the boys. The boys who were kept from shouting because of fear of their lives, followed the instructions of David as given.

When the boys got home on the evening of Wednesday, their mother Ataa found them to be walking differently. He assumed they were playing and didn't mind them. The boys kept walking differently on Thursday 17 December and that was when Ataa became conscious to check for the health of her children.

She found traces of blood at their nature's call point and asked them what was wrong but they couldn't speak. The 10-year old for fear of his life from David's threat, called her mother's attention to swollen parts on his body and that made Ataa sensed something. The children was not just abused but was physically touched and punched before David did what he wanted to do.

Ataa went to David for inquiry to his sons health since he was the one who was seen with them on Wednesday and David gave him slaps for coming to him. Ataa took the children to Mampong Asiam health centre and medical officials told her to make it a police report. At Asiam Divisional Police command was when the children confessed to the police officers how David used them for pleasure.

Ataa added her slaps and police issued documents for hospital clarification. Asiam Health centre laboratory officials, attested to it that the children has been assaulted both physically and for pleasure. David after hearing of police reports run to Bema, a remote township within the Mampong metropolis.

Asiam police through volunteers who gave vivid evidence of David's whereabouts, arrested David and has begun investigations into the case. David will be arranged before the Mampong magistrate court for hearing on his case. David has been booked for two crimes, assaulting Ataa and for allegedly using the boys for pleasure.

VIDEO: “She Can’t Sit ”-Teacher Who Allegedly Damaged Buttocks Of Young Girl With Canes In Trouble.

Assuming That You Have Wall Gecko In Your House, You Need To Know And Do This, They Can Take Lives