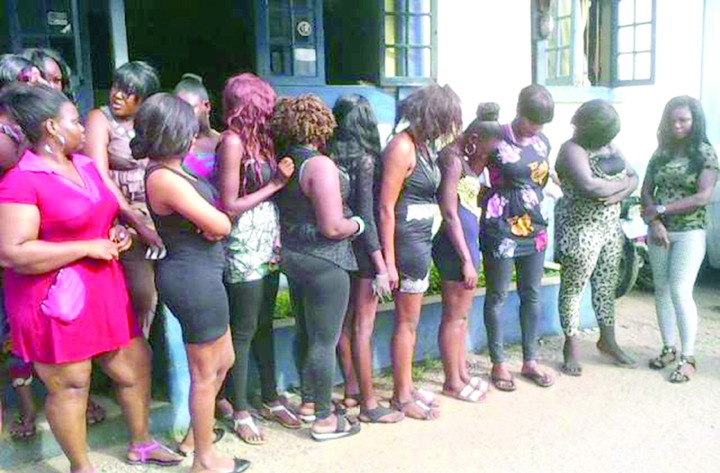 The activities of prostitution have been declared illegal in Ghana. However, several young ladies engage in the act in the blind side of the law-enforcing agencies.

The activity is widespread with most Ghanaians having an idea of where they operate from. Most of the young ladies who engage in the act are considered to be foreigners mainly from Nigeria.

Once in a while, the police acting on a tip-off organize swoops to arrest those engaged in the act and the laws are made to deal with them accordingly.

Even though it is men who patronize the services of prostitutes, it is very difficult to see a male standing on the roadside to find a woman in exchange for money from her.

One such exercise has been conducted by the Ghana Police Service recently at the Kwame Nkrumah Circle in Accra. It is widely believed that the prostitution business is very common there.

In the swoop, a total of two hundred and thirty persons were arrested from their hideout. Out of the number, one hundred and forty-five were males.

With this, a little over eighty of the victims arrested were prostitutes. According to information released by the Ghana Police Service, they retrieved mobile phones, ATM cards, and other items from their hideout.

A woman believed to be the mother recruit of all the prostitutes was also arrested. Some motor bicycles were also retrieved.

The one hundred and forty males arrested are considered to be young men whose age ranges from nineteen to thirty-five years.

It is believed that some of the men arrested were engaging in illegal drug peddling whilst the rest were patronizing the services of these prostitutes.

They have all been arrested and are assisting the Police in investigations.

However, the activities of prostitutes are gradually becoming widespread in the country with most Ghanaians complaining about the dangers it poses on the youth.

It is believed that some criminals work from the hideouts of these prostitutes. Concerns have also been raised that young girls are recruited into the business for a fee. We can all end the business by helping the Police to clamp them down.