By Upperwestmedia.net (self media writer) | 7 months ago 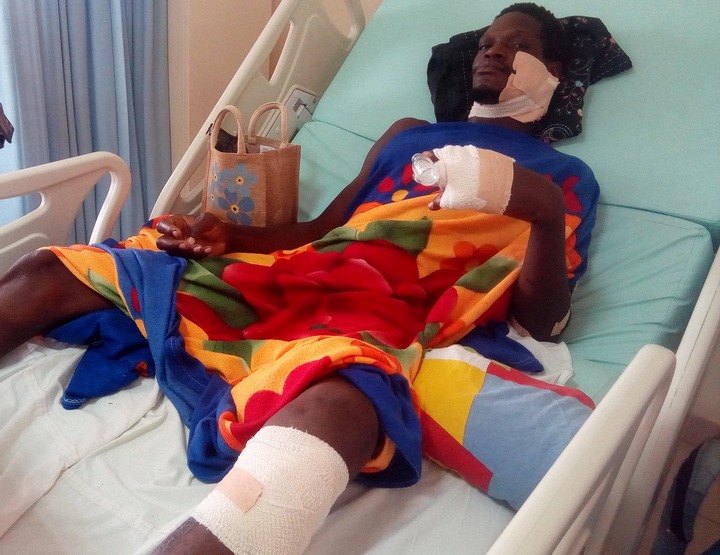 A 31-year-old farmer at Goli in the Nadowli-Kaleo District, Paul Kanfuri was reported butchered by a Fulani herdsman last Friday April 30, 2021 at the farm of the victim following a slipup between them.

The victim was rushed to the Nadowli District Hospital for diagnosis and treatment and was subsequently referred to the Upper West Regional Hospital where he is currently on admission and undergoing treatment.

Speaking in an interview at the hospital, Paul narrated that, “it was Friday morning when I got at my farm and found a herdsman together with his cattle destroying my yams, cassava and many other crops. I asked him to wait while my brothers come. He didn’t want to agree at first but finally succumbed.

Just when he accepted to wait, I went to sit only to realize he had taken to his hills. I chased after him and caught him, then he removed a machete and begun massacring me,” Paul has said.

He continued that, “at the time of the incident, which was about 5:30 am, nobody was there to my rescue.”

The severely wounded victim also revealed that over the years, Fulani herdsmen have been tormenting and destructing his farm plantations.

“Last two years for example, they destroyed my 10-acre cashew plantation and what was left is not up to fifty trees, including all my cassava. For this year, it is only the yams for now,” he sadly recounted.

The wife of the victim, Sophia Jon-ayigu also related that the Fulani herdsmen have been a torn in their flesh narrating that last two years, the herdsmen destroyed their cashew plantation of about 10 acres because the husband told the herdsmen not to graze on his farmland.

She pleaded on the government of Ghana to put up measures to curtail the crimes perpetrated by the herdsmen.

Madam Sophia expressed sorrow-ridden concerns about the medical bills she have to bear in having the husband treated.

She said even though the hospital is having sympathy but “it is not easy at all.”

It was confirmed that the police was yet to make an arrest as of today, following the incident.

He however assured that the police were still putting concrete measures in place to hunt the suspect who is currently at large after butchering the farmer.