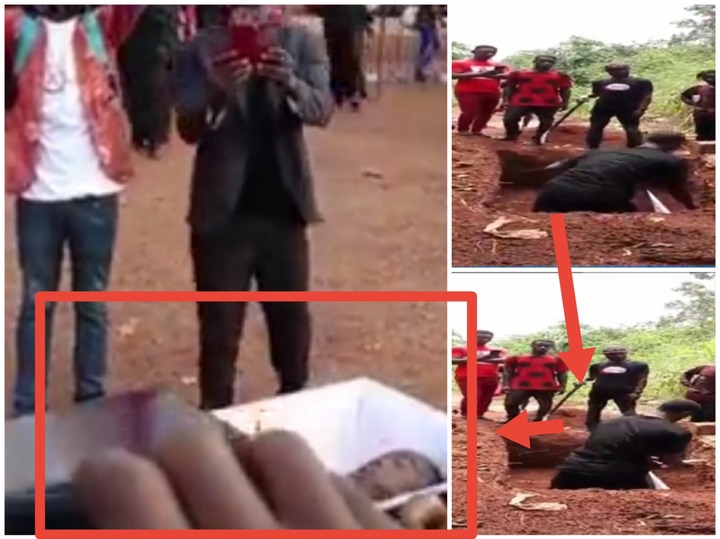 The siblings of the 15-year-old Stephen Sarpong who was murdered by Richard Appiah in Abesim, have invoked a ghostly attack on the later for the crime he has committed. At the burial site just when the pastor, family members and sympathizers had left, the siblings and other elderly friends of Sarpong opened the coffin and incanted some words onto a machete and other weapons, praying that the ghost haunts down his killer.

They later sealed the coffin after planting these weapons beside the corpse of Stephen Sarpong. They cursed that the spirit of the murdered teenager retaliates before it finally goes to rest.

As it is with the typical Akan group who believe the souls of the departed have the power to seek justice on those who are responsible for their unnatural death, Sarpong’s siblings wish their younger brother will act on their wishes. To them it's all about justice, as the news surrounding investigations conducted by the Criminal Investigation Department of the Ghana Police Service that the prime suspect, Richard Appiah, claims to be mentally ill.

They think there is a grand scheme to cover up for the crime, and they are not going to let Richard Appiah go freely. It was reported that neither of the families of Richard Appiah made it to the funeral of the Stephen Sarpong, let alone send their condolences to the bereaved family.

Through the lenses of M’akosem Television, one could tell that Sarpong was loved, and many have still not recovered from the shock about his gruesome murder by Richard Appiah. The family might have expressed confidence in the state regarding the prosecution of the prime suspect, they also believe a layer of spiritual judgement could be an excellent option.

Such a ritual performed by the siblings have become very common, and the aftermath very dire for whom that is deemed guilty. On the back of a defense that Richard Appiah acted out of abnormality, there is total confidence expressed by the siblings that Sarpong’s ghost and his ancestors shall be a best judge of character and freedom for Richard Appiah.

Given the experience with such rituals, it is expected that some reaction would be observed soon on Richard Appiah. This is expected within two weeks, and surely, Ghanaians would be confronted with the news about the consequences of this ritual.