By Abieku (self meida writer) | 1 months 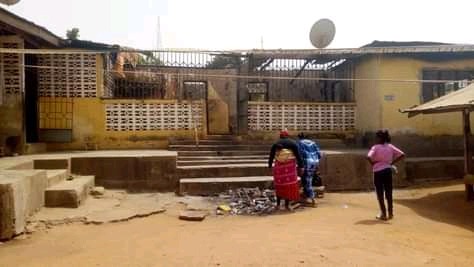 Photo for illustration purposes only.

The residents of Meduma, a community in the Kwabre East Constituency of the Ashanti Region have been thrown into a state of shock and mourning as a 40-year-old man sets his 9-year-old son on fire.

According to Nhyira FM's reporter who was at the scene, the man who can be identified as Kojo Asare is a 40-year-old father of young Daniel Asare and resides in a rented apartment in a compound house of about three tenants. Kojo Asare came home with a gallon of petrol and began sprinkling it at the entrance of his room at the blind side of other tenants who were in their rooms.

He then lighted a flame which drew the attention of the people around, unfortunately his son was asleep and the fire caught up with him. Passer-bys came to the scene to rescue those who were in their rooms on the other side of the house. Two tenants came out of their rooms unhurt but they couldn't pick any belongings.

Trying to escape the fire, the man also was caught by the fast moving fire and was badly injured beyond recognition. His son died in the inferno and he also has been hospitalized at the Komfo Anokye emergency center for medical care. Tenants have been displaced and some of them do not know where they will pass the night.

The reason for the man's actions is not yet known but the the Mampongten fire service personnel came to save the scene. The command have launched investigations into the matter.

Are You Allergic To Something? Find Out How To Stop Allergies