The mother of the vice president , Doctor Mahamud Bawumia, Hajia Mariama Bawumia has been laid to rest at Walewale within the North East region. 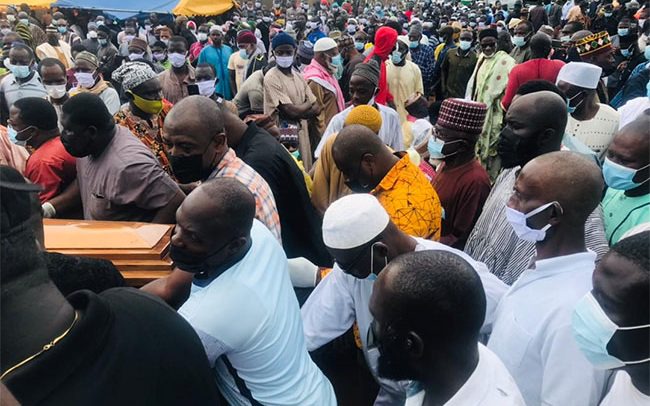 The mortal remains of Bawumia's mother being taken to the cemetery for burial.

Hajia Mariama gave up the ghost peacefully on September 13,2021 in Accra.

The late Hajia Mariama Bawumia was born on September 15,1939 and died at the age of 82 years.

She has been buried at an equivalent spot together with her husband the late Mumuni Bawumia.

Vice President , Dr. Mahamudu Bawumia, was amid elders of the family to pay his last reference to his mother before her mortal remains was laid to rest at the family house.

Alhaji Sulemana Sapaga, a brother of the late Hajia Mariama Bawumia and uncle of the vice president said the death of their beloved sister was a shock to every body in the family.

According to him, the late Hajia Mariama was instrumental within the education of just about all the relatives in the extended family.

“ She helped us tons in our education and impacted tons of lives within the family so it’s really sad and agonizing to part ways with such a personality who is patient and accommodating.”