Former blackstars and Kumasi Asante Kotoko striker, Godfred Yeboah goes home today following his tragic demise last month. The Ghanaian striker who is popularly known as Tv3, passed away on August 3rd at the Sunyani Regional hospital after succumbing to a short illness. He was given a closure today and in attendance were some board members of Kumasi Asante Kotoko and his former teammates, who turned up to pay their last respect to the late striker. 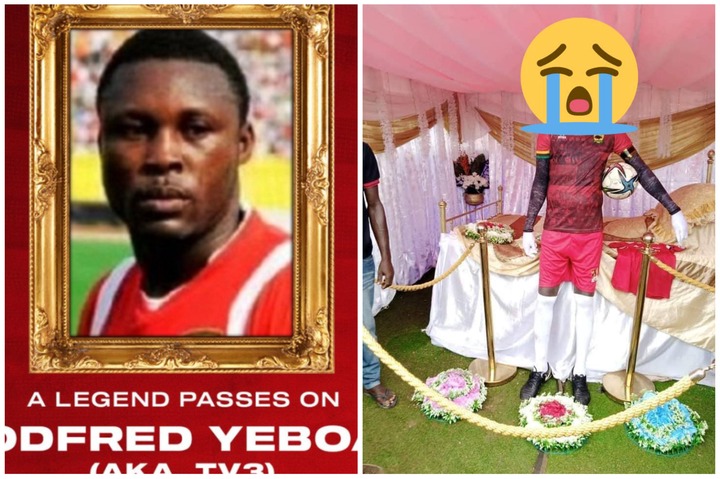 However some pictures from the funeral went viral and sparked some heated debate on the internet among netizens. Godfred Yeboah was laid in state in one of the unorthodox ways, where his body was made to stand as though he's alive, and has recieved some mixed reactions from Ghanaians with some claiming it was wired and a disrespect to the corpse. Among the commenters were some Muslims who found the picture bizarre and claimed they were glad to be Muslims since their religion doesn't permit such kind of closure. Take a look at the mixed reactions to Godfred Yeboah's extreme embalming.

According to embalmers, before the dead body can be laid in state this particular way, it is injected with some chemicals rendering the body rigid, making it possible for it to be contorted into the desired positions. At times, nails and poles are used to hold the body to prevent them from falling. The practice is very popular in some western countries and it's gradually becoming common in Ghana as well.

Not long ago, Kumahood actor, Samuel Manu, popularly known as Agya Manu was also laid in state in similar style. If you would recall, former Ghanaian broadcast journalist, Confidence K. Baah was also laid in this style. But some Ghanaians don't believe it should be adopted because it doesn't show respect to the dead body, others think it is normal, what is your view on it? Let us hear you in the comment section.

Check who is back to join the Hearts of Oak team