Fire out break at Bokokorpe

BOKOKORPE is a small village in shama district.

There was fire outbreak which was coursed by a man believed to be a lunatic, which some of the resident said he has treaten them severally by saying he will kill them and he even chases some of them with sharp objects and stones. 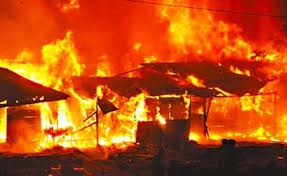 According to an eyewitnesses on Monday 31st May around 3 to 4 am, he woke up to realise his house is on fire, he then quickly call people for help not knowing he has set fire on two other houses.

Seeing that drawn an attention of the people in the community on him, before they approached him in his house, he has a lot of weapons by his side with lighter.

And he made it known to them that if anyone attempt he will use the weapon on him, but there were some youths who where able to got him down before the arrival of Beposo dunkwa police.

The eyewitness said there was two police in uniform with one other man he believes to be CID.

One of the police took him around all the three places where the incident happens and ask him if he was the one who set the fire on the houses and he said ''Yes'' he is the one. and the police ask why must he do that and he said he has issue with them, mean while one of the house belongs to his brother in-law, said by the eyewitness. 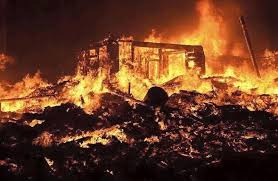 Now the issue has been handed over to beposo dunkwa police, and they are all looking forward for Western regional police to take an action because they are farmers and they don't know what may happen next.

Content created and supplied by: Mikael111 (via Opera News )