Akua with black veil (disguised) in an interview with Joynews' reporter

It appears most Ghanaians are quick to judge without getting the real facts surrounding issues. We are quick to craft our stories whenever there are issues even before the facts are made available.

For the purpose of this article and security reasons, we shall call her Akua (Not real name). She had gone to visit her boyfriend at Tantra Hill in Accra where the two were having a good time together. After some time, Akua started hearing a noise outside the room in what looks like someone trying to open their door.

He prompted his boyfriend who is a gym instructor and very popular in the area about the noise but he ignored it initially and told her it was a cat. After some minutes, the noise became louder and that prompted the lady (Akua) to be alert. She prompted the boyfriend again who got up from the bed and went for a knife from the kitchen for cover.

The house where the incident happened 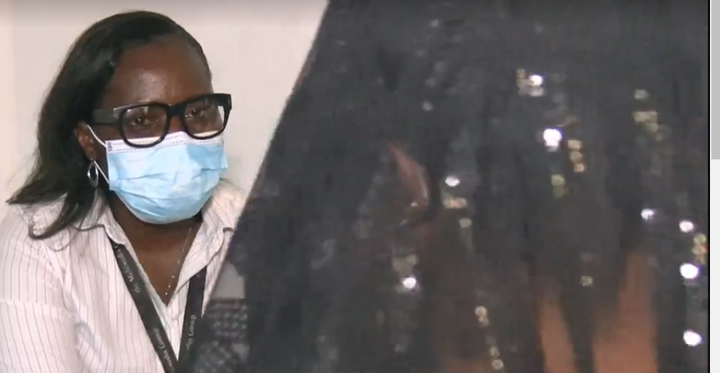 Akua with black veil (disguised) in an interview with Joynews' reporter

He was struggling to die and there was nothing the girlfriend could have done to help the station. The armed robbers had locked the door with a warning on her not to even try to open. The blood kept coming from the back of the boyfriend until he gave up the ghost after 20 minutes.

Many people have attributed the death of the gym instructor to a supposed husband of the girlfriend (Akua) who out of pain sent assailants to kill him. But Akua indicates that she has been divorced for the past eight years and as such, there is no husband to have threatened her late boyfriend. Most Ghanaians are quick to judge without verifying the real cause of an issue. The young woman has been wrongly accused of cheating on her husband when in actual fact, she is not married. only god knows the kind of trauma she is currently going through.

Hot And Curvaceous African Models That Will Stir You Up