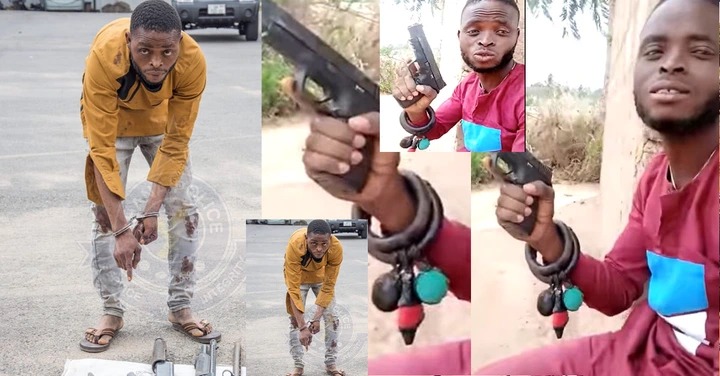 He was so fearless that he recorded himself shouting "Kill them all" while holding a loaded revolver. A careful examination of his left wrist reveals a talisman and a frightening ring, which could be his major source of strength. The young armed robber had become so well-known in Adeisu, Eastern Region, that locals were beginning to wonder what had made him so fearless. A courageous video showing him brandishing pistols and yelling "kill them all" has subsequently been broadcast on the Ghana Police Service's official Facebook page.

He appears to be fearless, and he will kill anyone who crosses his path. Over the years of his operations, a large number of innocent people have fallen into his lane. It's sometimes tough to comprehend how armed thieves appear to be unafraid. They go unnoticed into armed robbery situations and startle the hundreds of people that have come to witness their operation.

Juju has been regarded by many as their main source of strength because the majority of them wear a ring or talisman on their waist or wrist. Some of them are reported to be able to vanish when they are ready to be captured. Some of them are also said to be able to withstand gunfire because to the juju protection they have chosen. Godstrong Tetteiy, the "Kill them all" armed robber, was apprehended by the police after the juju on his wrists failed to work, and his terrifying ring could not prevent him from being apprehended. His cup seemed to be overflowing. 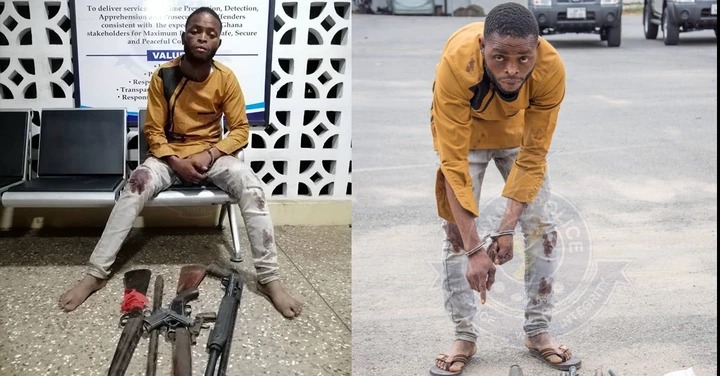 In photos uploaded on the Ghana Police Service's official Facebook page, about five firearms could be seen displayed before him. Even after his arrest, his behavior demonstrates that he has not regretted his actions, but he will have to face the consequences of his actions. One individual with five firearms; it's unclear how he manages to wield them all at the same time, but he's quite dangerous.

It's hardly unreasonable to suppose that Godstrong Tetteiy isn't operating alone, given how fearless he has been. He could be working with a gang, and the police need to conduct a thorough investigation to bring them all out at once. The arrest of such well-known armed robbers should serve as a warning to the rest of the gang that their juju isn't enough to keep the cops away. The authorities have taken another another quick step, but his other group must also surrender.