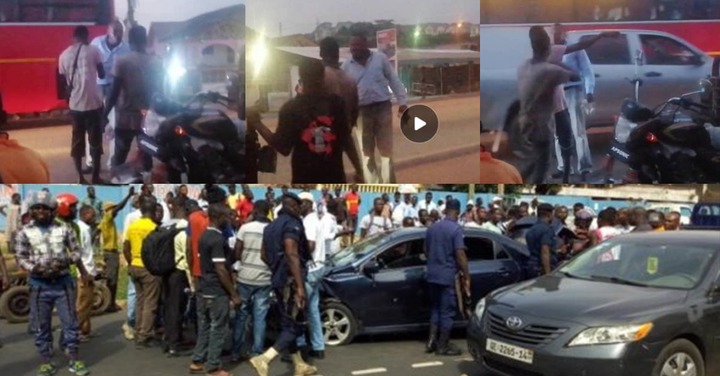 It was in the evening of Friday when most workers had closed from work and were heading towards home. Usually, those who do not have their private vehicles but work around the Central Business District of Takoradi where most people refer to as 'Town' board Trotro to their homes after the day.

For those who live in Kojokrom and the adjourning communities, the main road to their destinations is either the Efiankwanta-Sekondi road or the main highway. These two Trotro vehicles had loaded passengers from Takoradi and were heading towards Kojokrom through the main highway when misunderstanding occurred along the way.

As usual, Trotro drivers whilst alighting passengers will not hesitate to pick another whilst moving. That is the nature of their work. It was one of such banters that led to the fight between the two drivers. One had spotted a passenger ahead (Around Efiakuma block yard) and was in a hurry to pick her up but the other driver was way ahead.

In a bid to outsmart the one leading him, he decided to speed up and engaged in a serious overtaking. This angered the other driver who thought his colleague was engaging in reckless driving. As the other was picking the passenger, he parked his vehicle and moved straight to him, and started accusing him of driving recklessly in the name of picking a passenger. His argument is that the other could have caused an accident that would have affected the passengers in his vehicle.

After some time, the two drivers were separated and continued their journey. The issue of two drivers fighting is a common sight on our roads. Most of them are known for using foul words when they are offended. It is, however, condemnable for any driver to abandon their passengers to fight another.