Following a collision between an articulated vehicle and a commercial bus carrying passengers, several people are fighting for their lives. 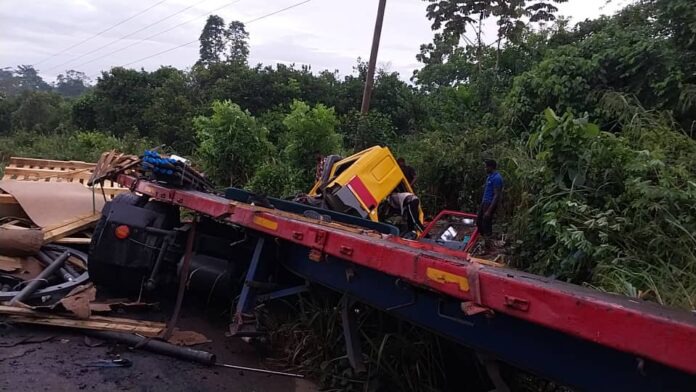 Around nine o'clock on Tuesday, June 21, 2022, in Oframase, close to the Nkawkaw section of the Accra - Kumasi Highways in the Eastern area, an accident happened.

An eyewitness said that both vehicles attempted to overtake a stationary Rhino truck carrying charcoal in the middle of the road without looking in the direction of oncoming traffic, which led to the head-on collision.

Agoo News met with an eyewitness shortly after the accident, who claimed that the bus passengers, especially those in the front seats, had suffered major injuries.

He claimed that the police arrived on the spot a short time later to free the victims and transport them to Holy Family Hospital in Nkawkaw.

In a related occurrence, a near-fatal collision involving 22 passengers happened on the Accra-to-Kumasi Highway at Densuso, near Suhum, at approximately 12:15 pm the same day.

A sprinter bus traveling from Accra to Kumasi with the registration number AC 435-20 was involved in the accident.

The driver of the Sprinter bus lost control of the steering wheel as a result of a tyre blowout while traveling at high speed.

The driver and children were among the 22 injured victims who were taken for medical attention to the Suhum government hospital.