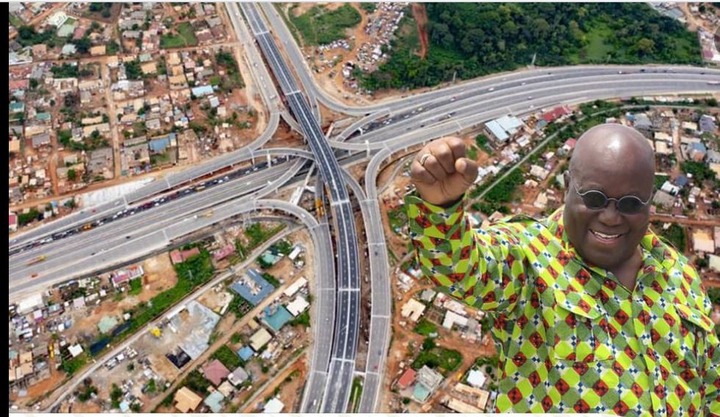 Ghana’s Minister of Roads, Kwesi Amoako-Atta has showered praises on the newly constructed Pokuase Interchange, describing it as a one-of-a-kind infrastructure in the whole of West Africa.

According to him, the completed interchanger that is being commissioned today, was originally planned to be a three-tier one, but the New Patriotic Party (NPP) under the leadership of President Akufo-Addo was able to get it into a four-tier interchange

“It is very important to put on record that the original contract for this interchange was a three-tier. However after critical value engineering exercise, which led to some cost savings undertaken by the contractor, the consultant, and the department of Urban Roads, the government under the leadership of His Excellency Nana Addo Dankwa Akufo-Addo converted this interchange into a four-tier one. Accepting the decision to convert the original three-tier into a four-tier was accepted on July 16, 2019,” the Minister of Roads revealed at the commissioning of the interchange.

Mr. Amoako-Atta stated that the interchange, moving from a three-tier one to a four-tier one without any additional cost could only be possible under the visionary leadership of President Nana Addo Dankwa Akufo-Addo.

He averred that it is his hope that a vital piece of road furniture such as the Pokuase Interchange will not be vandalized and stolen for scraps as has been happening in any other areas of our countries by some unpatriotic people of the land. He thus charged that every Ghanaian must be on the lookout for such criminals so that those practices can be reported to the police for prompt action.

The Minister said the interchange has been constructed to the required standards as was approved in the contract, and that the contractor is highly recommended for undertaking both day and night works to get this work completed.

He expressed his happiness with how the project was executed without any fatality being recorded throughout the project life despite the complexities involved in the project.