Throwback: When a thief after stealing decides to eat all the foods in the kitchen

By the_Kelvin_guy (self meida writer) | 12 days

Wonders shall never end and has never anticipated coming to a halt in this world of ours. Gird your loins because as far as you stay existent in this world, the news you are going to hear each and every day is going to make you marvel.

This story happened in March and it is actually a throwback to when a certain thief kept people wondering as to whether he was a thief or just a hungry man looking for food. Join me as we analyze this whole unbelievable theft mission.

This incident happened in "Wassa Akropong" which is found in the "Wassa-Amenfi East Municipality" in the Western Region of Ghana. The suspect (thief) was a very young and energetic gentleman probably in his twenties. As an energetic young man, you would expect him to go out there and toil to put something great on the table but his principle was way different.

"There's always a shortcut to greatness even if it's illegal". This guy nearly joined his forefathers on the other side of life after he was caught doing the unexplainable.

Unlike other thieves, he couldn't resist the redolence of the fine meal radiating from the kitchen. Like a magnet, he was pulled towards the center of gravity (kitchen) and comfortably pleased his soul with the sumptuous dishes available.

The suspect was said to be a member of a gang who kept residents in the neighborhood busy as well as uncomfortable since they always feared losing their property at anytime. They were always on the alert because they had been victims of theft for too long.

Imagine the pain associated with creating a property using your blood, sweat and tears and then another person using just a few minutes to take them all. 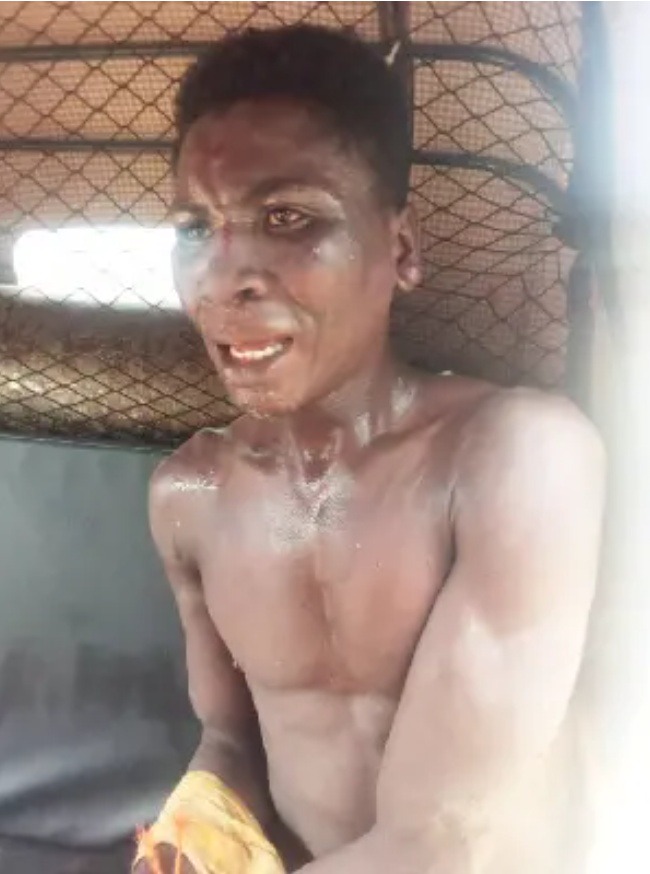 It is said that he broke into the house on a market day at Wassa Akropong. On market days, people leave their homes to engage in their businesses at the market since it is a very busy day in that town. That was the perfect day to strike, he thought.

Per reports, he broke into the house of a woman known as "Madame Akua Manu" who wasn't at home at that particular moment. He had already stolen a television set and a decoder but that wasn't enough. He decided to finish the delicious African meal in the kitchen. Perhaps, he couldn't resist the aroma.

This criminal ate all the chicken soup and several balls of "banku" (a local Ghanaian diet made with corn and cassava dough) they had left in the kitchen. Imagine salivating the whole day, thinking about the food you left at home only to realize someone broke into your home and consumed it all.

It is said that the kitchen looked messed up after he was caught. This infers he made a long search to find where some of the food had been hidden. The redolence of the soup would direct him straight to it but finding the banku would be like engaging in "pilolo" (a local Ghanaian game where the participants search for hidden items)

It seems the thief wasn't satisfied with the banku he ate. He continued the adventure with "gari soakings" but unfortunately his luck evaded him. That was when he realized he had made a huge mistake, he was caught. 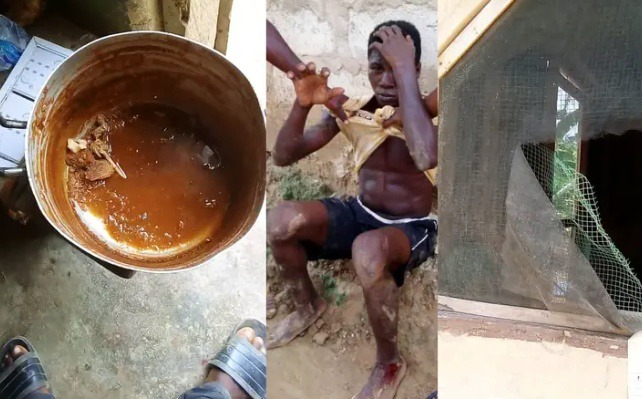 After catching him, he tried initiating an escape mission by overpowering them but unluckily for him, his power could take him nowhere. I guess the energy derived from the food wasn't good enough.

He was then beaten till the police came to his rescue.

Guys, let's be real. Was it really hunger or he's just a thief because a real thief would have fled after taking the belongings he found without attending to the food. You can let me know in the comment section.