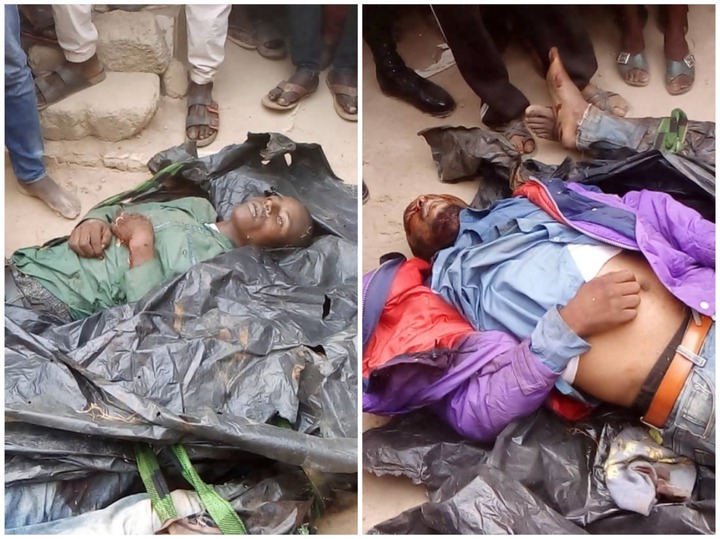 Two armed men of the Robert gang escaped when the other two were killed. Currently, the local vigilante group is on a hot pursuit for the two armed robbers. The night was bloody as these two robbers who were shot dragged themselves in the ground hoping to be saved by their colleagues.

The Sawla Police have taken up the case and the bodies of the deceased have been conveyed to the local morgue for processing and investigation. Weapons and motorbikes that were used by these robbers have been retrieved.

The two robbers who were killed are yet to be identified. Per an observation they could be in the ages of 30 or late 20s. The Kalba community woke up to the alarming news of the deadly exchange of gunfire and blood stains in the street.

According to residents the community and neighbouring towns have been terrorised by these criminals for the past weeks. Just recently, two people were killed by unknown armed robbers.

The local patrol team believed that these robbers could be responsible for these crimes. They explained that their operations will continue until these criminals are wiped out from their community.

The Kalba community falls within the Sawla-Tuna-Kalba District of the Savannah Region of Ghana. The District Police Command has been supportive of this local community watch.

It is expected that with the combined operations of the Police and the local patrol teams these armed robbers that have been terrorising residents especially women will be eradicated. Over the past months several night operations have been carried out within the enclave and thus push further the operations of these criminal gangs from the town.

But the local vigilante group has lots of intelligence about the planned operations of these armed robbers and with their support the police and the patrol teams are clamping down on them.

Akufo-Addo Should Tell Us, How Many MMDCEs He Has Fired Because Of Galamsey