The Anti-Robbery Task Force is clamping down on armed robbers in the Ashanti Region. A robbery gang has been 'smoked out' by these professional police officers leaving three of them eliminated in a fierce fire exchange at Buokrom Estate, Kumasi.

According to a police report, the three were shot during the exchange but couldn't survive the gun wounds while they were being treated at the Kongo Anokye Teaching Hospital. Through a robust intelligence gathering mechanism the Police Administration has adopted for its operations, the Anti-Robbery Task Force were alerted about a planned robbery attack on a businessman within the Buokrom Estate neighborhood.

A patrol team was then deployed to mount a search on all vehicles that used that road leading to the community. The robbery gang who least expected the armed police personnel to be stationed at that hour opened fire to break through their forces but luck eluded them.

The fearless Anti-Robbery team fired back and took down three of these armed robbers until the last person surrendered to the police. He was arrested and is assisting Police investigations. 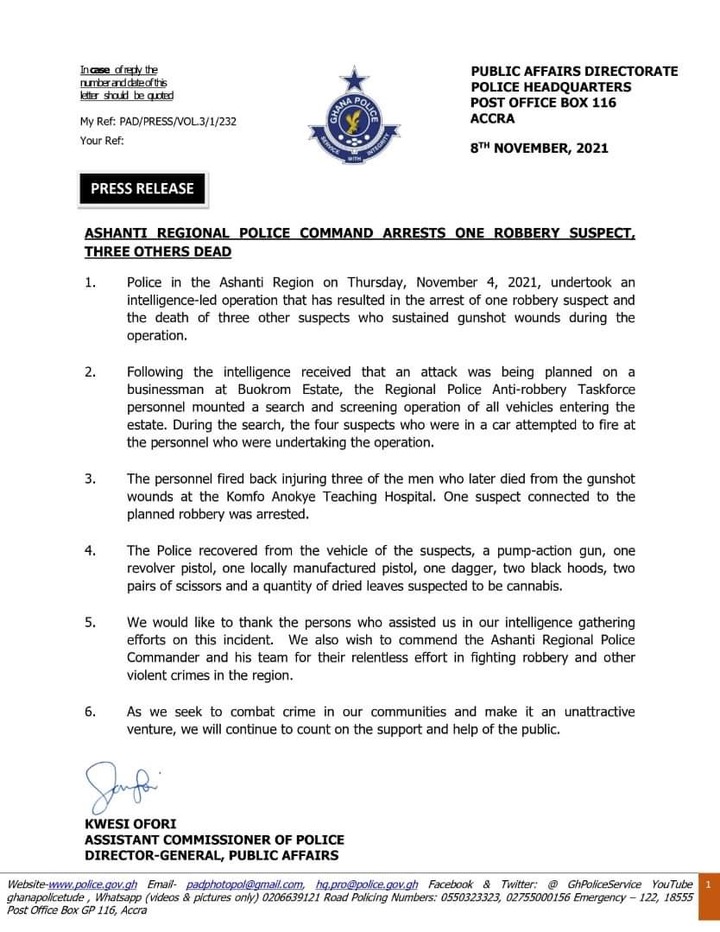 Some illicit arms including a pump action gun, a revolver pistol, locally manufactured pistol and black hoods which are suspected to be used by these armed robbers as disguise, were found in the car.  Some other substances including herbs suspected to be cannabis were also recovered from them.

The identities of these armed robbers (including the deceased) are yet to be identified. In the meantime, the police has expressed its profound gratitude to the public for trusting them with leads in protecting them from such criminals.

They have thus urged the public to continue to support them in fighting crime by volunteering information about the activities of criminals. The Ashanti Region Police Command continues to battle out deadly criminal gangs in their jurisdiction, and they shall continually rely on the intelligence unit of the command to clamp down on them.

As witnessed under the new Inspector-General of Police, Dr George Akuffo Dampare, the Anti-Robbery Task Force had never been that tough on robberies as it is today. The sad norm of the police being reactive to incidents has changed as they are now forestalling the execution of these robbery attacks on innocent civilians.