Six Men Arrested For Inserting Stick Into Anus Of A 16 year Old Thief.

By TheGhostP (self media writer) | 4 months ago

Kofi Asadu, 29, Francis Obeng Amoako, 79, Obeng Mensah, 30, Osei Bonsu, 53, Boakye Dankwa, 65, and Kwasi Marfo, 24 all of agogo, Asante Akyem north municipality of the Ashanti region got arrested after a video of them showed they inserted a stick into the anus of a 16year old boy known as Enoch whom they allegedly caught when he broke into a shop. 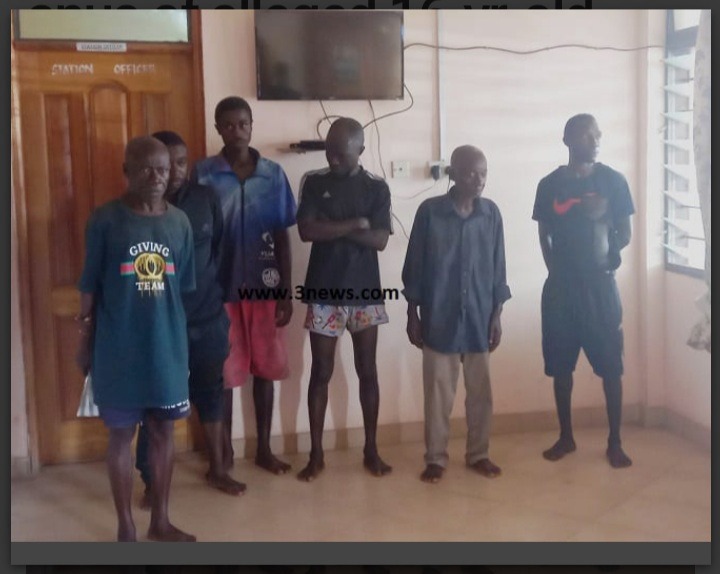 The victim was allegedly caught after breaking into a shop, as little as he is, instead of disciplining him for him to learn a lesson, these six men of which some of them can even be the alleged thief's grandfather decided to tie his hands and legs and inserted a stick into his anus. This act was recorded on video which went viral on social media.

After the insertion, the ropes were untied, the victim then got up, removed the stick and left.

On July 12, District Police Commander for Asante Akyem North Chief Superintendent Owusu Bempah explained that “after watching the video and upon thorough analysis with some natives of Agogo, we were able to identify the six perpetrators who were captured in the video and swiftly arrested them.”

The eldest amogst them Francis Obeng Amoako 79, admitted that they committed such heinous act.

Content created and supplied by: TheGhostP (via Opera News )