By joe_baby (self media writer) | 1 month ago 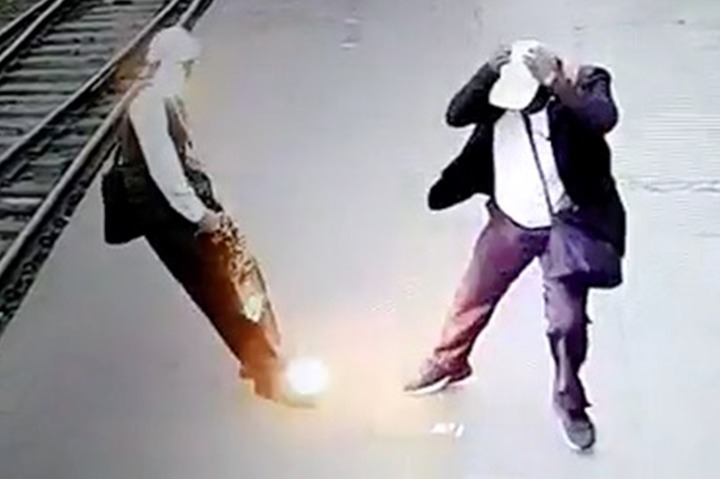 After being shocked by a fallen power cable while standing at a metro station, an Indian ticket inspector redefined what it means to "get wired." The internet is exploding with shocking CCTV images of the bizarre accident.

According to Jam Press, the shocking occurrence happened on December 7 while the unnamed ticket-checker was conversing with a man on a subway platform at the Kharagpur Junction train station in West Bengal State.

A stray cable appeared to have fallen on the inspector, cutting off his discussion and shocking him with a flood of volts. He is seen falling backward onto the subway tracks as the power line strikes his upper torso, briefly setting his clothes on fire.

The victim manages to roll onto his side after being immobile on the rails for several seconds. At that point, onlookers show up and carry the victim off the tracks on a stretcher.

Thankfully, despite receiving some burns, the railroad worker survived his unintentional electroshock therapy. Authorities have since initiated an investigation into the incident in an effort to determine how the cable became loose.A Manhattan man was killed on Sunday, Dec. 4, after coming into contact with the third rail while crossing the subway lines, according to police, in a more serious electrocution event that occurred closer to home. A train then struck his body.

In the meanwhile, in September, a homeless man died after touching a high-voltage track at a Long Island Railroad platform in New York's Penn Station.

Watch the video Below