Driver to be fined after footbridge accident - Highway Authorities Hints

Driver to be fined after footbridge accident - Highway Authorities Hints 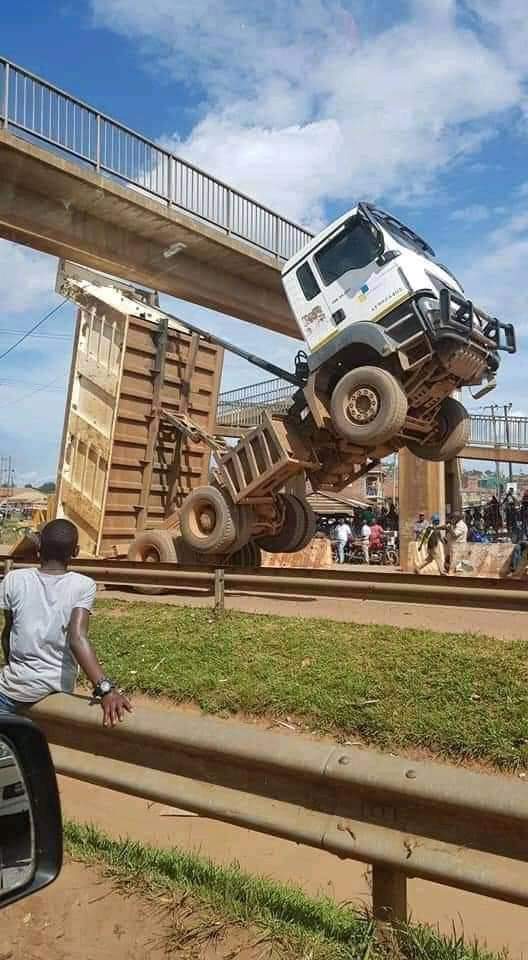 A tipper truck driver will not be allowed to go free after his careless driving which caused massive problems and unnecessary traffic this morning, at the Tiafa footbridge overpass. The driver Inusah who started his job this month, could not work for even the full month before getting himself into troubles. Inusah drives the tipper truck which belongs to one of his friend's company and only does delivery sand and rocks with the truck upon company orders. He drives only when he is to make delivery and that has been the main focus of his job since the beginning of April this year.

Inusah was called yesterday to deliver rocks to a construction site at Taifa, where construction of an eight-bedroom house was been done. He went to the loading site and took his loads of the truck, but the person who was to receive the goods, was not picking his calls, and Inusah could not deliver the goods when the owner of the rocks, called him back in the evening. They scheduled the delivery for this morning, and Inusah was the first to the site to start his truck and proceed with his delivery.

Inusah reached the site peacefully and delivered his goods in sound, but did not check well before setting off from the construction site. He did not check whether the truckload was properly locked to the central locking bolt bed of the truck before driving back. He heard several sounds from the back of the truck and never did it occurred to him to check if everything was well with the truck or the truckload before continuing his journey back to the company.

At the Taifa junction where the overpass footbridge is, was where the truck got stuck. Inusah used the same overpass on the going road, but upon returning was when he faced challenges with the coming road. The Taifa junction overpass is the same overpass footbridge that crosses the outgoing and incoming roads. It lies above the Accra to Kumasi highway after Tantra Hills and it was the same road Inusah used when he was going. The truck got stuck because of the loosened truck rod which was attached to the truck bed to the truckload box. The loosened truck rod made the truckload hang while Inusah was driving the truck because it wasn't locked to the truck bed.

As the driver Inusah tried using the footbridge, was when the loosened truckload got stuck to the bridge. Inusah with the help of pedestrians was able to get down using the truck strings which the truckload sat on. The police were able to direct traffic which was caused as a result of Inusah's recklessness. The heavy traffic that was installed on the road was able to ease when the police got there. Inusah had made a formal complaint to the Taifa police post on how it happened, which he blamed on the accident, but the Ga East District Assembly in charge of roads and highways is pushing for his arrest for causing damage to the footbridge. His actions could have broken the bridge if the bridge was in a deterred state.

Inusah if everything goes as plan, will have to answer to a jury in why he lost the tryck rod which caused the truckload to escape from the truck bed, and if he is found guilty, a charge of not less than GH¢10,000 will be labelled against him said the prosecutor in charge of the case. The laws needs to be enforced and if we fail to enforce it, it will set a bad precedence for others to follow, rumoured Mr Nyantoh who was pushing for his arrest. The police MTTU division was working with the road highways department to get the truck down before it causes further harm to pedestrians and other people. Two towing MTTU trucks were on their way to the junction to lose the truck from the footbridge, while Inusah waited with the police. He was the only one found in the truck and he was driving without a truck assistant. 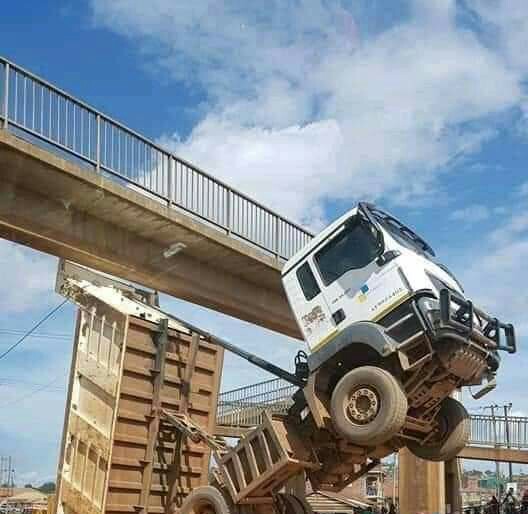 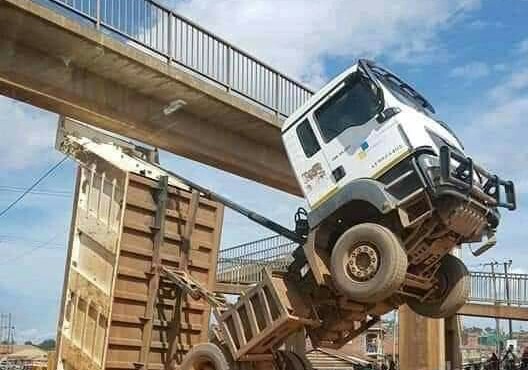