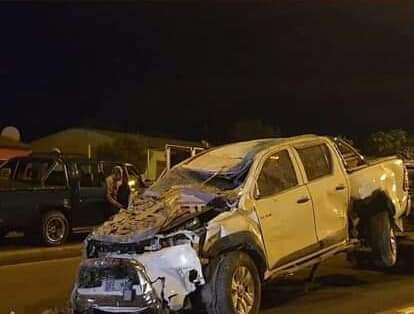 Five persons have been injured at Duayaw Nkwanta after a pickup Toyota Hilux somersaulted last night. The driver of the pickup Fiifi Forson was driving from Obuasi to Sunyani when the accident occurred. Fiifi before Duayaw Nkwanta did smell some burning sensations coming from the back of his pickup truck and never bothered to check until they were 20 kilometres away from Obuasi. The front passenger seat victim who collapsed at the spot, forced Fiifi to stop and check the car when she couldn't breathe from the burning sensation again. And Fiifi did check all the two back tyres without checking the front tyres. The fault which was coming from the front tyres of the car escaped Fiifi to the point that, he didn't even think the front tyres were fault and needed checking. Fiifi after navigating the only curve which leads to Duayaw Nkwanta had a blast from his right-hand side tyres.

He was able to control it but the steering wheel was lost as a result of the loosened front wheel tyre. Fiifi crashed into a Mahogany tree which was situated on the left-hand side of the road when he couldn't control the car anymore. All five persons who were in the car sustained serious injuries and were rushed to the Komfo Anokye Teaching Hospital and are all in stable condition except Fiifi who was responding well to treatment. They were coming from Obuasi, after attending a funeral on Friday and Saturday, when the accident occurred last night. Fiifi's boss, Madam Cecilia Ampomah who is a resident of Sunyani Apex Estate, was in Obuasi for the burial of her best friend when she got into the accident.

They had arrived in Obuasi on Thursday evening for the burial on Saturday morning, and the car didn't show any signs of fault until Saturday morning when they were going to the cemetery for burial. The car broke down after an electrical fault which the driver Fiifi was forced to get a local Obuasi Mechanic. The mechanic was able to fix the car on Sunday morning, after spending the whole of Saturday with the car. There was no fault again after Fiifi picked the car from the mechanic yesterday morning. The car which was delivered by the mechanic in the morning crashed in the night when they were returning from Obuasi to Sunyani, and Fiifi in his accounts to the Obuasi Police this morning, made accounts of how the Mechanic is to be blamed.

Fiifi is not certain what caused the accident, but believes firmly that, the mechanic if he did his job perfectly well, wouldn't have had a blast which has left his boss and her family in a coma at the Komfo Anokye Teaching Hospital. Obuasi Police are still investigating the accident after Fiifi made mention of the mechanic, Joseph Amoah who is a local auto mechanic at Obuasi New Area. 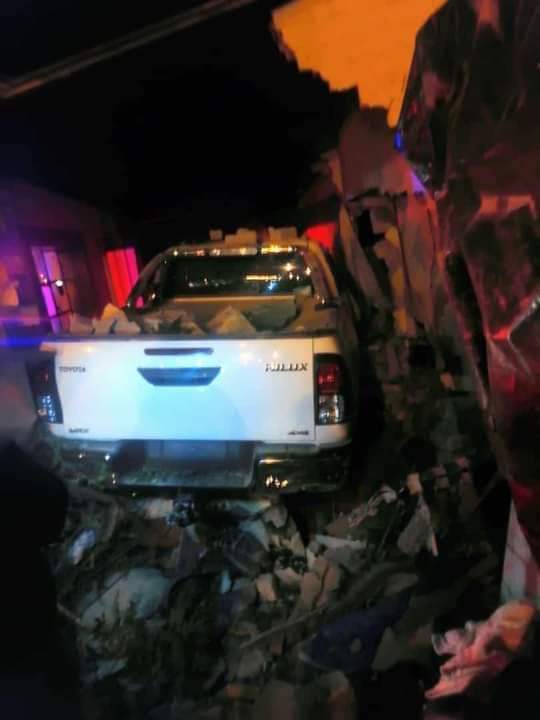 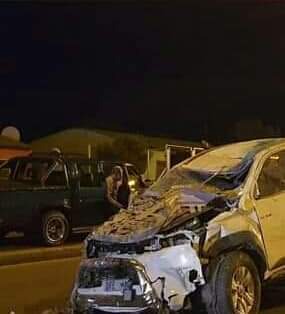