By ElohaiBusiness (self meida writer) | 25 days

Reports reaching Elohai News confirms that a young man who is married with a child has been stabbed to death by a friend.

This incidence happened at Berekum in the Bono Region of Ghana on Tuesday, April 20, 2021 around 7:30 am.

According to reports reaching Elohai News, the the deceased woke up early morning to go and collect money from one of his friends who owes him.

Further reports tells that, that friend of the deceased has owed him for a long period of time. 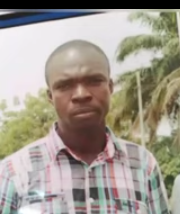 He even evacuated from the town exactly two months after he borrowed money from the deceased who was his tight friend.

The sad issue that, the deceased never heard from his friend and never had his money ever since his friend traveled out of the town of Berekum.

It was just last night that he overhead that his friend whom he borrowed money to and never heard from him again is back in town.

So he woke up early the next morning to go and demand for his money which he had owed him before living town.

Upon his arrival, the demand for his money from this old friend turned to confusion which later turned into a very big fight.

The debtor who happens to be the suspect entered his room took a knife and cut the left hand of the deceased.

As the deceased was shouting for help on top of his voice and suspected told him to stop making noise in his house but he would not listen. 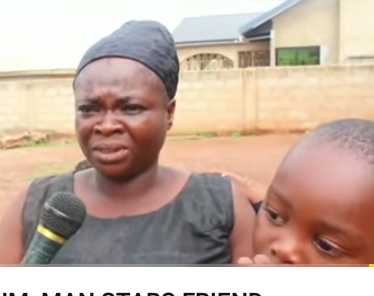 (Wife and child of deceased)

The deceased continued to wail for help as loud as his voice could help him. This made the suspect grew more angry and stabbed the deceased in the heard.

She deceased shouted and collapsed immediately, neighbors who heard the sound of his shout rushed to the scene and rushed him to the hospital.

But unfortunately he could not respond to medical treatment, he passed on some few minutes upon arrival at the hospital.

The cold body of the deceased has been conveyed to the morgue at Berekum Government Hospital while the suspect has been arrested by the Berekum Police.