After the President had expressed his dissatisfaction towards illegal mining "galamsey", government has within the past four years being in a serious course of fighting the activity.

The government had being working with the National Security Service in his fight against galamsey. It has being deploying personnel from the service to various places where the activities of galamsey are ongoing.

Recently people in the Eastern Region saw an army of soldiers whose mission is to stop illegal mining activities within the region. Towns which saw a lot of concentration was Akim Kyebi, Osino, Anyinam, among others.

Meanwhile there had been any unexpected incident in their course to stop the activities. 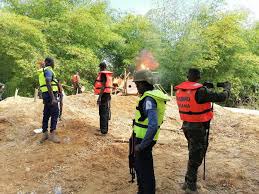 20 self-styled National Security operatives have allegedly been remanded for indulging in the galamsey activities within the above stated Region. They are said to be awaiting trial.

The arrest sparked some sort of suspicions before it was proved by the National Intelligence Bureau that the suspects are not staff or operatives of the National Security Ministry.

The arrest which occured at the Atewa Forest, Kibi, was made by some concern youth of Akyem Akenteng.

“Upon completion of preliminary interrogation, both the arrested persons and their said contractor have all been remanded and are due to be arraigned before court,” a statement from the Ministry of Information released on behalf of the National Service Service.

The Ministry has however cautioned the public against perpetrating crimes under the guise of National Security.

The government had through a consultative dialogue, had charged stakeholders to take steps to strictly apply the country’s mining laws.

Meanwhile the government's effort to stopping the illegal mining activities has seen many excavators being burnt at different locations.

The Minister of Environment, Science, Technology and Innovation (MESTI), Dr Kwaku Afriyie had said earlier that the government will continue to burn the excavators being used for illegal mining when the soldiers seize them.