Prof. Kwaku Azar Has An Awkward Opinion About The Burning of Excavators.

The Prez. on Wednesday reaffirmed his determination to root out illegal mining and stated that the burning of equipment used for the pollution of water bodies and forest reserves will not cease till the criminal acts are halted.

This statements have since received backlash, as the President of the Small Scale miners Association of Ghana, Michael Peprah has expressed disappointment in the Prez's endorsement of the burning of excavators seized from illegal miners. 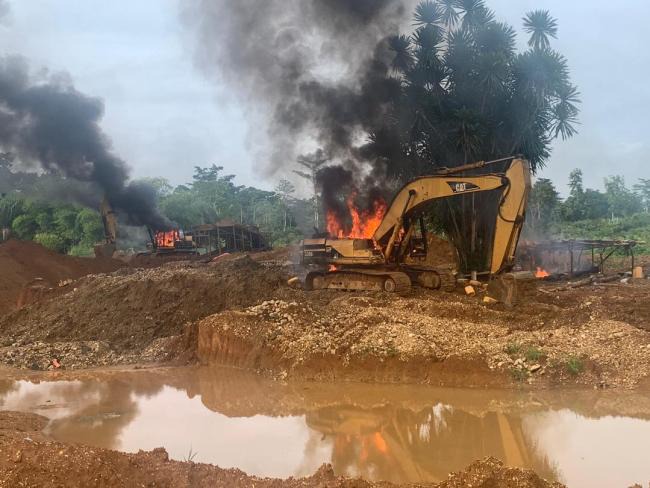 Fast forward, in a sharp twist, renowned Accounting Professor, Lawyer, and Social Media critic, Prof. Kwaku Azar may have introduced a new twist, where he indirectly questions the wisdom of the burning of the mining equipment that costs millions of cedis.

Inn his Facebook page, which is followed by almost 33,000 people, he wrote that, "Under the novel legal theory that “equipment which is being used for an illegal or criminal purpose cannot confirm on the owner or any other person any rights whatsoever,” when will the military be invited to burn the black V8 and other similar vehicles that use unauthorized sirens to cause noise pollution in the city? Da Yie!" 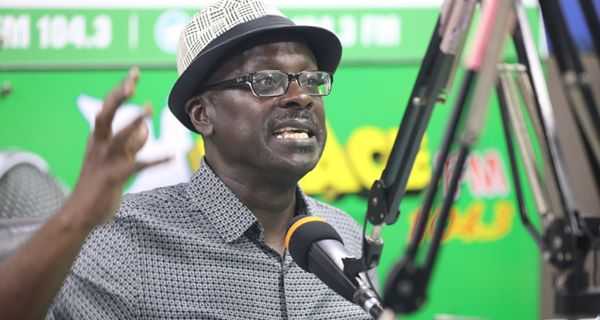 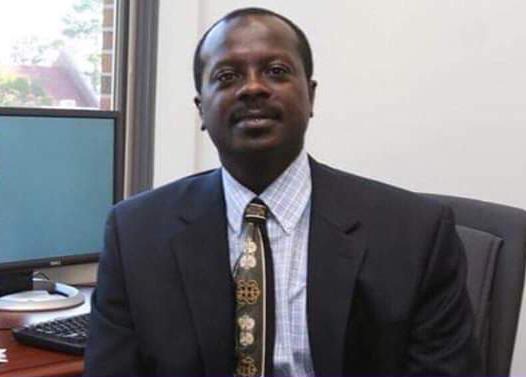 Clearly, he insists that if we can have such powers to burn the equipment's because of the illegality it is used for, then same energies should be used, to at least curb the abuse of a privilege, that is legally meant for few but is also largely abused in Accra mostly, by some big and rich people.

Commentary that has since followed include the following:

George Buckle writes "It's so pathetic that our standing army which has no other business to do in peace times has been manipulated to join a selective war on galamsey. In peace times, we as a developing nation don't need a standing which drains on our GDP. We are using taxpayers monies, to maintain a standing army without war. We need to use this idle standing army, to construct roads n maintenance services of our infrastructural development.

Woe to Ghanaians for inhibiting such mediocrity. Let them burn the V8's n witness the uproar 'go to court'. What a pathological system of governance our so called Ghanaian elites have designed for us! GoGo shall demonstrate the proper functions of government n let the elite military know their stance in National development."

Shaibu Saeed Yeboah writes "You will never understand the importance of the advocacy for law and order until injustice falls on your neck!" 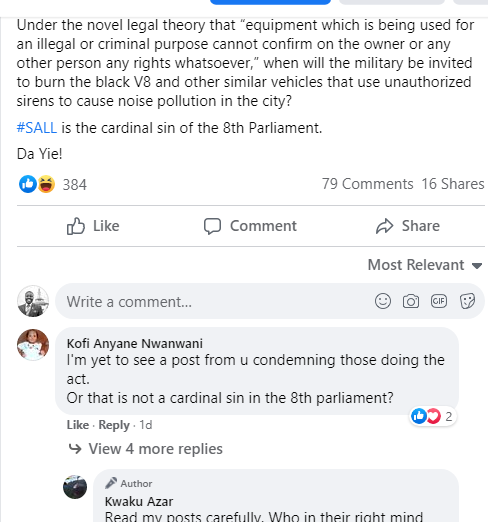 Selasie Woanyah writes "So the state can chop a suspected thief's hand off even though such a punishment is not in our criminal law?"

Kojo Duah writes "Hehehe, Prof, this is very far-fetched. Then we'll start chopping that thing men use for rape or defilement.........and we'll pluck out eyes that look at things they're not supposed to see"

Korshi Badohu writes "Or burn unauthorized and not road worthy cars on our roads?"

Larry Gbevlo-Lartey writes "Does not justify burning by soldiers without an order from the courts. I would submit. The courts are there to pronounce on the guilt of crime and illegality and to punish. Not soldiers."

Redeemer Del-k writes "Prof, it seems, 'this mistake' is unpardonable."

In concluding, its worth noting that, this suggestion of his is not practical, but at least, it brings to mind the fact that, it is so because of the unseen protective strategy, which basically protects a class of the citizenry. The calls for the right use or immovability of the mining equipment's are in the right direction, especially when burnt equipment's will even destroy evidence, that can be presented in our courts to aid prosecution of the offenders.

But who knows, maybe, the legal prosecution bit, may well not a part of this plan to end the menace that galamsey is causing to our river bodies and forest reserves. 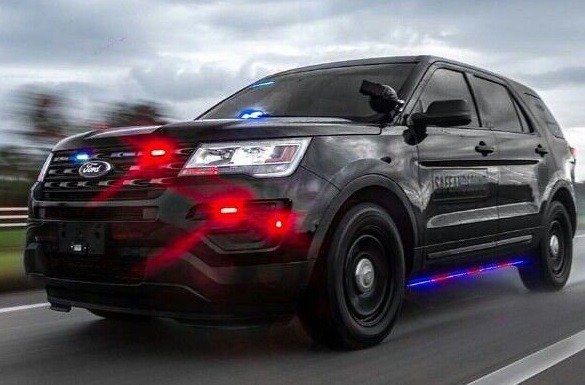