Husband reports wife for reportedly stealing from her former employer.

Esther has been accused of stealing money from her former company. Esther's husband, who suspected the act caused her arrest.Esther together with her accomplice has been arrested and arraigned before Court.

Esther Obiri, a former employee of Town and Country books service, is standing trials after she was initially confronted and later reported to the company's authorities by her husband, for stealing from the firm.

The report originally published by the chronic newspaper stated that Mr. Enoch Obiri reported his wife to the company for allegedly conspiring with her former co-worker to steal an undisclosed amount of money.

Esther and her alleged accomplice have since been arraigned before Accra circuit court on two counts of stealing but both pleaded not guilty to the charges.

According to the prosecutor chief inspector, John Gohoho, the complainant in the case is the sole proprietor of the town and country Books service. He added that the two suspects were the complaints former Secretary and warehouse keeper respectively.

The prosecutor further told the court that though, Esther resigned from the company in 2017, her husband discovered that she was still in touch and secretly dealing with someone from her former colleagues.

The officer also said that Esther's, the husband became alarmed and apprehensive when he realized that his wife disclosed her intentions to acquire a shop worth GHC, 35,000.00.this situation prompted esther's husband to inform his wife, former employer without hesitation.

But Esther vehemently denied the theft claims,when she was confronted by her former employer according to the prosecuting officer. Enoch in a bid to prove his allegations searched through his wife's belongings and retrieved some invoice,booklet belonging to the company and handed them over to the sold proprietor.

The was reported to the police and Esther together with her alleged accomplice were arrested. It was disclosed in court today, that during investigations, the accused persons admitted to having conspired to steal textbooks worth Ghc20 000.00. Esther was also said to have paid an amount of GhC1300.00 out of the amount "stolen" to the police.

Also, it was discovered after two audits were commissioned by the complainant in the last 2017, books worth, 136,961.25 went missing.

The case has, however, been adjourned to November 3,2021. 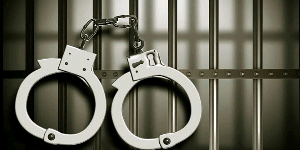