Four persons who were going to the final funeral rite of the late Bernice Serwaa Obeng has been involved in a terrible accident at Akuapem Mampong. The driver of the Toyota Camry who was driving the mourners is among the critical victims at the emergency unit of the Akuapem hospital waiting to be transported to Koforidua Regional Hospital for emergency care. Olivia the only survivor with minor injuries, narrated the ordeal as the complete faults of the residents of the town, though the driver was overspeeding in addition.

Olivia and her friends were attending the final funeral rites of their colleague who died in Mankranso in February 2021. Bernice was a working colleague of Olivia and the other four people who are at the Akuapem hospital fighting for their health. They were to join the family in the morning to mourn Bernice when the driver of the Toyota Camry which was carrying the mourners lost its balance and tripped off the road, leading to a crash near the ECG Office.

The driver was going beyond his speed limit and didn't know the road to thee town either. They were following a tipper truck to the town where the tipper truck driver was giving them directions, when the accident happened. The tipper truck branched at Adei, 4 kilometres away from Akuapem and instructed the driver of the Camry to go straight with no branches until they get to Mampong Akuapem.

The driver who didn't know the road should have calmed down with minimum speeding, when the tipper truck driver gave him the last direction to the town after branching at Adei. The Camry driver right before entering the Akuapem Mampong township did not see the high-speed ramps which had been constructed by the residents of the town, and drove sudden to it.

The high-speed nature of the Camry threw the car to an indomie food vendor when the driver came suddenly to the speed ramps. The driver who was not in seat belts, and the front passenger were all involved in the accident because of their lack of seatbelts. Additional two people who were sitting with Olivia at the backseat of the car sustained serious injuries too, while Olivia who was sitting directly behind the front passenger seat sustained minor injuries because of the seat belt she had on. Out of the five people in the car, it was only Olivia who was appropriately in her seat belts. 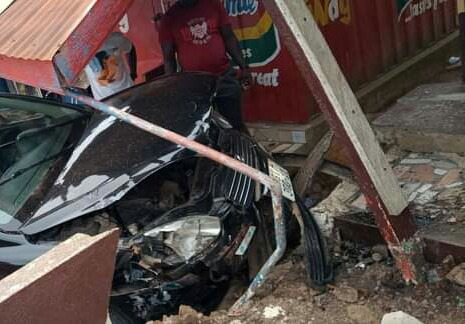