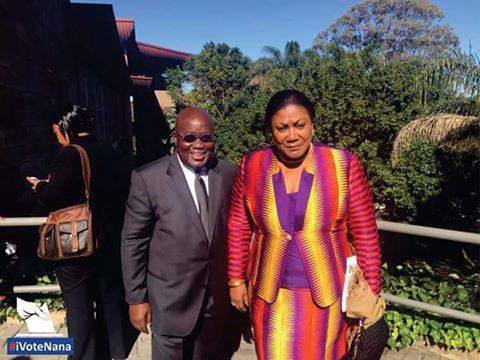 NANA ADDO DANKWA AKUFO ADDO President of the 4th Republic of Ghana on 7th January 2017. He is currently in his second term.

Nana Addo Dankwa Akufo-Addo was born on 29th March 1944 at Swalaba (Nima) in Accra (National Capital). He is from Kyebi in the Eastern Region of Ghana.

Edward Akufo-Addo was his father and his mother was Yeboakwa Ofori-Atta. Ist Lady Rebecca Akufo-Addo is his wife

Three of the "Big Six" (the founding fathers of Ghana) were Nana's blood relatives J.B. Danquah (grand uncle). William Ofori Atta (uncle) and Edward Akufo-Addo (the third Chief Justice of Ghana and later President of the Republic of Ghana from 1969 to 1972, was his father).

Nana had his Primary education at the Government Boys School and later Rowe Road School (Now Kinbu) both in Accra.

He attended the University of Ghana to read Economics and graduated in 1967. After graduating as an Economist, he went on to read Law in the UK and was called to the English Bar (Middle Temple) in July 1971. After his call to the English Bar, he went to work in Paris (France) as a lawyer.

In 1975, he returned home to Accra to continue with his legal career and was called to the Ghana Bar in 1975.

He became Vice President and President of the Greater Accra Regional Branch of Ghana Bar Association from 1991-1996.

Nana Akufo-Addo founded and subsequently became the first Chairperson of the Ghana Committee on Human and Peoples' Rights.

He was one of the founding members of the New Patriotic Party (NPP) in 1992.

In 2008 and 2012 Nana Addo Dankwa Akufo-Addo was elected by his Party (New Patriotic Party) to be the flagbearer and lost the two presidential elections to National Democratic Congress (NDC).

Nana Akufo-Addo was elected again by the New Patriotic Party (NPP) as the presidential candidate for December 2016 election and he won.

On January 7, 2017, Nana Addo Dankwa Akufo-Addo was sworn in as the President of the Republic of Ghana.

He is the President of the Republic of Ghana from 7th January till date.