With the Champions League last-16 first legs done and dusted, it's the perfect time to take stock of the knock-out stage so far.

It's fair to say Paris Saint-Germain, Liverpool, Bayern Munich and Manchester City are all but through to the next round after resounding victories over Barcelona, RB Leipzig, Lazio and Gladbach, respectively.

There is still plenty to play for in the other ties but now it's time to shine light on our best rated XI from the first leg action.

Liverpool managed to put their disappointing domestic form to one side and leave their away leg with RB Leipzig with a 2-0 victory. Liverpool had to withstand a good start from Leipzig to begin with before easing out winners in the end. Alisson made two saves and successful regained possession for Liverpool in the defensive third on two occasions.

Back in the starting XI, Kyle Walker justified his selection with an assured performance in City's 2-0 win away to Gladbach. The 30-year-old completed in excess of 90% of his attempted passes and made six tackles and interceptions combined - equalling his record in a Champions League game this season

Cesar Azpilicueta's return to favour under Thomas Tuchel continues to go from strength-to-strength after securing the WhoScored Man of the Match award in a hugely impressive 1-0 win away to Atletico Madrid on Tuesday. The Chelsea defender won six aerial duels, completed three tackles and interceptions combined and even registered two key passes despite playing in a back three.

Ozan Kabak has endured a tough start to life in the Premier League but did at least show plenty of promise on his Champions League debut for Liverpool. Perhaps facing familiar opponents in RB Leipzig helped Kabak, but he certainly dealt with their attacking threat better than he has in the Premier League. The 20-year-old weighed in with seven tackles and interceptions combined, worked the high line well to catch Leipzig offside three times and made two clearances to help Liverpool keep a clean sheet.

Moved over to the left to accomodate Kyle Walker in the side, Joao Cancelo shined once again for City despite being on his weaker side. The Portugal international curled in a perfect cross for Bernardo Silva to head City ahead against Gladbach in the first half and was again seen taking up positions all over the pitch. Cancelo completed 93.5% of his attempted passes, made four tackles and also completed four dribbles in an all-action display.

After a nightmare spell with Everton, Moise Kean is once again showing what a talent he is on loan with Paris Saint-Germain. Kean scored in their first leg victory over Barcelona to extend his scoring run to three matches. In addition to his goal, Kean also completed four dribbles, matching his tally from his five previous appearances in the competition this season. Not only that, but Kean worked hard off the ball with three tackles and interceptions combined - more than he had previously managed in the competition combined (2).

Bernardo Silva continued his returned to form on Wednesday night, playing a direct hand in both goals in a 2-0 win over Gladbach. Silva nodded City ahead with a well-taken header(!) and then turned provider to set up Gabriel Jesus for their second on the night. 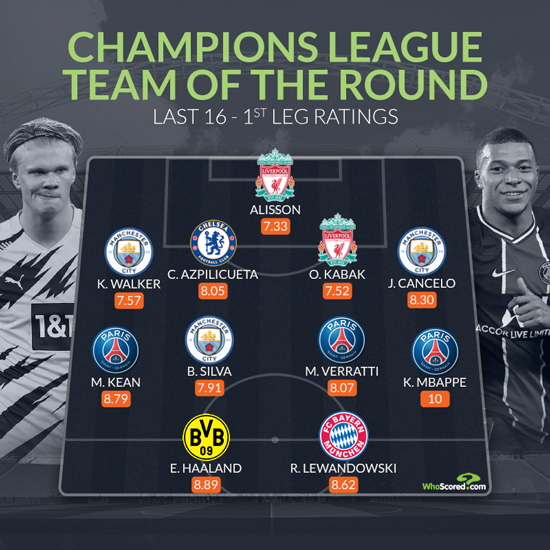 Marco Verratti was not at full fitness for Paris Saint-Germain's stunning 4-1 win away to Barcelona earlier this month but it didn't stop the Italian from turning in a superb showing. His assist for Kylian Mbappe's equaliser was out of this world and later made a superb last-ditch tackle on the edge of his own area. He completed five dribbles before coming off in the 72-minute for a well-earned rest. Perhaps most impressive, Verratti came off without a yellow card to his name.

After scoring a hat-trick away to Barcelona, there is no question who our Champions League Player of the Round is. Moreover, Kylian Mbappe remarkably completed one more dribble (10) than Barcelona managed as a team. Not just a ruthless finisher, Mbappe also created four goalscoring chances for his team-mates, though none were converted.

Erling Haaland later revealed Kylian Mbappe's hat-trick gave him extra motivation for Dortmund's clash with Sevilla and it showed. The 20-year-old played a direct hand in all three of Dortmund's goals, as the Bundesliga outift came from behind to secure a 3-2 win away from home. Haaland netted twice and provided one assist to put Dortmund in control of their last-16 tie.

Robert Lewandowski claimed the WhoScored Man of the Match in Bayern Munich's 4-1 win away to Lazio on Tuesday after netting his 30th goal of the season across league and European competition. Moreover, the Bayern striker completed three dribbles against Lazio, one more than his previous four appearances in the competition combined this season.