1. Juventus legend Alessandro Del Piero criticises Cristiano Ronaldo for throwing his Portugal captain’s armband to the ground. ‘This is an over-reaction.’

“ He shouldn’t act like this, in that way,” “It’s OK to be angry, it’s OK to discuss it with the referee, but to throw the armband and keep going like this is too much for someone who is the team captain and represents an iconic figure like him.

2. Neither Barcelona or Real Madrid have the kind of money to even convince Liverpool to come to the table for Mo Salah, and LFC have no intention of selling.

3. Robert Lewandowski is out for 4 weeks - will miss both legs of the Champions’ League clash with PSG.

4. UEFA have confirmed both legs between Chelsea vs. Porto in the UCL quarter-final will be played in Sevilla's Ramon Sanchez-Pizjuan Stadium.

6. Manchester City and Chelsea have both identified Inter Milan's 27-year-old Belgian forward Romelu Lukaku as their back-up choice if they fail to sign 20-year-old Haaland.

7. A decision over the new Champions League format from 2024-25 has been postponed to April 19 after a handful of big clubs reportedly made extra demands. The plan was meant to be ratified in today’s meeting, but has now been delayed to April 19.

8. The English Football League has appointed its first female referee, Rebecca Welch, to officiate a game. She is the FA's highest ranking female referee.

9. Marco Verratti is reportedly a major doubt for the first leg of PSG’s Champions League quarter-final with Bayern Munich due to a thigh strain.

10. Euro 2020 will be Joachim Löw's final tournament as Germany boss. Will he be tempted to recall Thomas Müller.

11. Lionel Messi, 33, however, has told Barcelona to sign Aguero, with his fellow Argentine's signature a key demand in his own negotiations to extend his stay with the Catalan club.

12. RB Leipzig's France Under-21 defender Ibrahima Konate, 21, has already passed some medical tests before a potential move to Liverpool.

13. Juventus goalkeeper Gianluigi Buffon has been suspended for ‘blasphemy’ during the match against Parma and thus misses the Turin derby.

14. World Cup winner Kylian Mbappe, 22, has told French selectors that he will not be available to play at this summer's Olympic Games in Tokyo, with the Paris St-Germain striker instead keen to focus on deciding his club future. He has a new contract with PSG to consider, while Liverpool, Manchester City and Real Madrid are all interested in his signature.

15. Atalanta tactician Gian Piero Gasperini has been named The Coaches’ Coach of the Year in Serie A for the second time in a row.The Italian Coaching Association has awarded the Panchina d’Oro (the Golden Bench) to Gasperini for the second straight season.

17. The restructuring of Barcelona under the new club president Joan Laporta is continuing with two new vice presidents set to be appointed at the Camp Nou.

18. Sassuolo and Italy midfielder Manuel Locatelli, 23, who has attracted interest from Manchester City and Real Madrid in recent months, is expected to join Juventus next season.

19. Paul Merson says he was shocked by the announcement of Sergio Aguero's departure from Manchester City, but insists Pep Guardiola's side must already have a replacement lined up to let the "goal machine" leave.

21. Manchester City manger Pep Guardiola has said Sergio Aguero is "irreplaceable" ahead of the striker's departure this summer.

22. Premier League stars are set to face up to referee Mike Dean for another season amid reports he will delay his retirement.

23. Ole Gunnar Solskjaer will now have to choose between Dean Henderson and David de Gea as Manchester United's No 1 for the rest of the season after giving both a chance to impress. WHO WOULD YOU PICK?

24. Cristiano Ronaldo's angrily-discarded captain's armband is up for auction to raise money for a sick child in Serbia.

25. Gareth Southgate is expected to revert to a back three in England's World Cup Qualifier against Poland on Wednesday and will make a late decision on Mason Mount.

26. Manchester United have reportedly held talks with Edinson Cavani, as they look to convince the striker to stay beyond this season.

27. Real Madrid is the preferred destination for Borussia Dortmund striker Erling Braut Haaland this summer, according to journalist Josep Pedrerol. 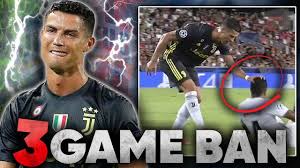