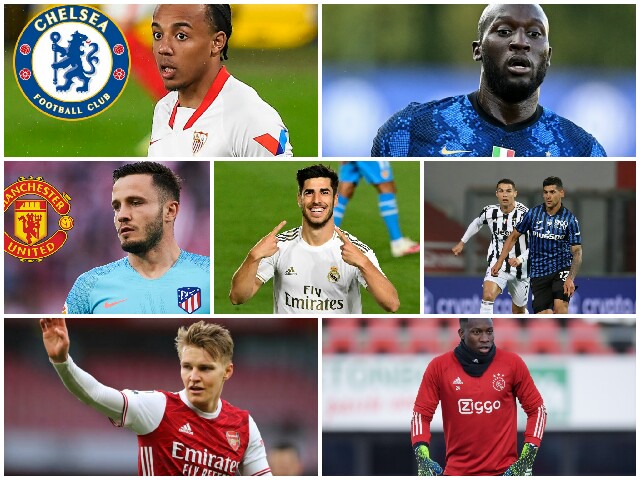 Chelsea to make another bid for Lukaku

Chelsea have intensified their chase for Belgium and Inter Milan hitman, Romelu Lukaku despite three rejected bids by Inter Milan. The 28 year old emerged as a new target for Chelsea after they pulled out of Erling Haaland's race, but they are still facing struggles to proceed with the deal. The blues are reportedly readying an improved €130m bid to tempt Inter Milan to sell Lukaku. The Blues are prepared to give him a staggering €12m(net) as salary, €5m higher than what he earns at Inter Milan to convince the Belgian striker to accept the move.

Tottenham nears completion of the transfer of Atalanta defender, Cristian Romero. The Argentine defender was heavily linked with moves out of Atalanta and was once on the wishlist of the Red devils, however latest news claims Atalanta reached an agreement with Tottenham Hotpsurs yesterday and the move will be finalised today. According to Fabrizio Romano, the transfer would cost Spurs €55million and would happen in the next few days.

Sevilla have named their price for highly rated french defender, Jules Kounde amid Chelsea interest. The blues have registered concrete interest in the 22 year old and were contemplating on using Kurt Zouma as a makeweight to complete the transfer. Nonetheless Zouma told Chelsea point blank that, he's not ready to move to Sevilla, which has stalled the move for sometime. The Spanish club says they want €70m before they allow Jules Kounde leave the club and blues may be forced to cough up the staggering amount, if Zouma remains unyielding with his decision.

The Gunners are planning to raid Real Madrid as they look forward to securing moves for Martin Ødegaard and Marko Asensio. There is no two ways about Arsenal's interest in Ødegaard and the Norwegian continues to be a prime target but Arsenal are also interested in signing Asensio, who has been at the fringes of Madrid for sometime. The move for Asenio and Ødegaard would cost Arsenal €35m and €50m respectively.

Athletico Madrid midfielder, Saul Niguez is avaliable for a meagre €38m this summer, after Athletico scrapped of his hefty release clause. The 27l6 year old was earlier linked to Liverpool and Barcelona but there hasn't been any concrete interest yet, however news from Manchester United camp says, the club have spoken to Saul's entourage and a move is anticipated soon if both parties reach an agreement.

AC Milan is desperate to sign an attacking midfielder this summer after Hakan Calhanoglu's exit. The Rosseneris identified Chelsea winger, Hakim Ziyech as the ideal player to fill the void but they seem to have pull out of the deal to sign the Moroccan. Latest update from Italy says Milan have turned attention to Real Madrid outcast, Dani Ceballos and would be hoping to sign the spaniard before the window ends.

Cameroonian goalkeeper, Andre Onana reportedly prefers a move to Arsenal as he approaches the end of his doping ban. Ajax Amsterdam is ready to sell Onana if his ban ends in November 3rd and it was reported that, Olympique Lyon was the favourites to sign the 25 year old. Nonetheless the Cameroonian is reconsidering his decision after Arsenal enquired about his availability. Onana would opt for a move to the Emirates if they make an offer for him.