Meet Emma Hayes, The Chelsea Women Manager Who Is Guiding Her Team To The Top

By commeybernard (self media writer) | 1 year ago

The profile of Chelsea Women Football Team's coach and how she has shaped her Chelsea team.﻿ 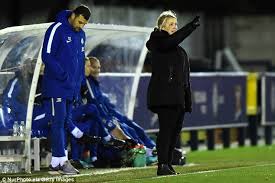 Emma Hayes is an English professional football manager. Currently, she is the manager of FA WSL club Chelsea Women. She has been successful in her managerial career since joining the blues women team. She has built a very confident and strong team which dominated the women's league in England last season. Let's take a look at her profile and stats as a manager.

Hayes studied and graduated from the Liverpool Hope University in 1999. She first managed the Long Island Lady Riders between 2001 and 2003. She also coached at Iona College in New Rochelle between 2003 and 2006 before joining Arsenal as first team assistant and also the academy director. Emma Hayes couldn't play football due to injuries at the age of 18. She also coached at Chicago Red Stars in the United States from 2008 to 2010.

Emma Hayes was appointed the Chelsea women team coach in August 2012 and has been there for 8 years now. When she took over, she has transformed the team and are the champions of the women's league now. She took sometime before her team became strong as it is now.

After taking 2 years to build her team, she took Chelsea to a narrow missing out on the 2014 FA WSL 1 title on the last day of the season. She came back strong in the following season and since then her team is the most dangerous to face in the FA Women's Super League. Below are trophies she has led the team to since the 2014/15 season when she restructured her team.

Emma Hayes has started the 2020/21 season well and will be hoping for more trophies as the Chelsea women's team manager.

Content created and supplied by: commeybernard (via Opera News )