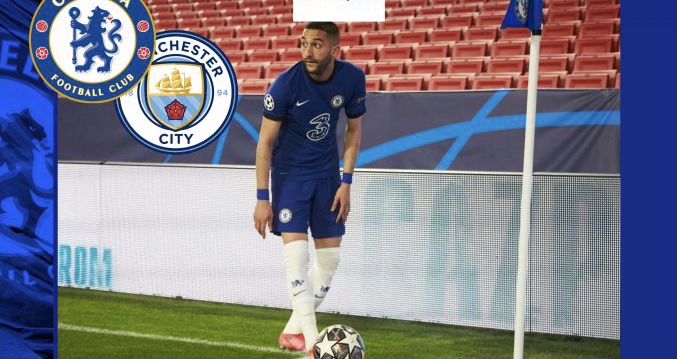 Chelsea will take on Manchester City for the semis of the FA Cup today and Hakim Ziyech believes the Blues can end the week in a fine form.

Despite having admitted to earlier struggles from switching teams and leagues, the 28-year-old appears to be having a reviving time recently.

Speaking ahead of the game Ziyech said; ‘For us it’s a nice week so far.

‘I think we can finish the whole week with a good result again on the weekend and, hopefully, then we can say it’s a complete week.

I like to play the big games – I think that’s the same for every other footballer – but I just see them as another game. It’s a semi-final right now, we will do everything that is in our power to reach the final and how we do it doesn’t matter.’

The former Ajax man was part of the squad that lost to Pep Guardiola’s men back in January in a 3-1 score line and he didn’t fail to write off the threats City pose as a team.

‘They are leading the league and they are really impressive this season, the way they play. You can see they have individual players who can do crazy things. As a team, they can do a lot of things and it’s just the way of how they play football.

‘I played them in January here and I think in the first half the game was already over. What I can remember is when they speed up the tempo, they are a difficult team to beat.’

Ziyech’s first season in the FA Cup has been indeed challenging and less easy task but he believes this could serve as a fulcrum to push him into better performances.

‘It’s a difficult season, with everything around adaptation and injuries, playing then a couple of games not playing,’ the winger added.

‘It’s a difficult season but I think for every player sometimes it could help to have these seasons because you have to work harder and keep improving every single day.

‘It’s about the rhythm and sometimes you think you have the rhythm then you get a set-back. It took some time and I have to continue to believe in myself.

‘I’m not loud about it but I have to keep going and keep working and the rest will come by itself.’