Ronaldo has scored 32 times for the Bianconeri this season, but cut a frustrated figure after he was unable to add to his tally in Turin. 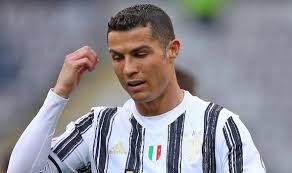 The Portugal star threw his shirt away before he walked down the tunnel to the dressing room despite juventus win and it was picked up by a ball boy, this came shortly after the Portugal international was involved in some controversy during the international break when he threw his captain’s armband on the ground because he had a goal wrongfully not given by the referee.

The Portuguese attacker has scored 25 Serie A goals in 27 games this season, but he failed to find the net against Genoa after missing chances to score. He struck the post in the first half before Morata followed up to double Juve's lead and hit the target only twice in six attempts.

Alvaro Morata, Dejan Kulusevski and Weston McKennie all scored for the Italian champions, but Ronaldo grabbed the media's attention with his reaction after the final whistle

Thank you for reading..... Kindly follow me for more exclusive news