Chelsea will host Everton in the Premier League on Monday in what is expected to be a close game between two teams vying for a place in the top four. 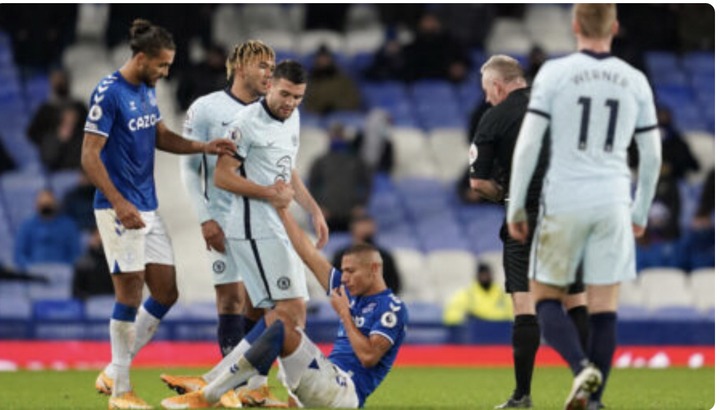 Thomas Tuchel’s side currently occupy fourth position in the league table, but Everton are just a point behind in fifth and have a game in hand.

The Toffees are in a good run of form and seem to be peaking at the right time. Chelsea, on the other hand, are yet to lose under Tuchel.

The Blues thoroughly dominated Liverpool in their previous outing, picking up a 1-0 win. Everton also picked up a narrow 1-0 win against West Brom.

A lot is at stake today and we can expect an exciting match from both teams at Stamford Bridge tonight.

Chelsea moved into fourth position on Thursday evening courtesy of an impressive 1-0 win away to the champions Liverpool, with Mason Mount scoring the only goal of the contest at Anfield.

The Blues are still unbeaten since Tuchel’s arrival at the end of January, with the German winning seven and drawing three of his 10 matches in charge of the London giants.

Chelsea had drawn back-to-back league games with Southampton and Manchester United ahead of the trip to Anfield but managed to return to winning ways against Jurgen Klopp’s side, who are also locked in a top-four battle with the likes of Man United, Leicester City, West Ham United and Tottenham Hotspur.

Arguably only Manchester City are certain of a top-four finish, and Tuchel’s team will fancy their chances at a top four finish as well.

The Blues have the third-best home form in the league this season, collecting 23 points from 13 matches, but they will be taking on an Everton side with the fourth-best away form in England’s top flight, and there is no question that the Toffees will be eyeing a Champions League spot as well.

Everton also picked up a huge three points on Thursday evening as a second-half effort from Richarlison handed them a 1-0 win over struggling West Bromwich Albion at the Hawthorns.

Carlo Ancelotti’s side have now won each of their last three in the Premier League without conceding, which has seen them rise into fifth position in the table, one point behind Chelsea with a game in hand.

Only Man City (20) have won more matches than Everton (14) in England’s top flight this term, and another positive result at Stamford Bridge would leave the Merseyside giants in a strong position ahead of three winnable games against Burnley, Crystal Palace and Brighton & Hove Albion.

Everton, as mentioned, have been impressive on their travels this season, and they will be looking to complete their first league double over the Blues since the 1978-79 campaign, having ran out 1-0 winners at Goodison Park in the reverse game back in December.

That said, Chelsea are unbeaten in their last 25 Premier League home games against Everton and recorded a 4-0 win when the pair locked horns at Stamford Bridge last term.

How the Natch Could Go

Based on what is at stake and recent performances of late, both sides have equal motivation to win this game. Everton have shown their top-four credentials in recent weeks, and the Toffees will now be eyeing another positive result as they push towards the Champions League spots. Chelsea have been impressive since Tuchel’s arrival, but there is a chance they could drop points against Ancelotti’s improving side. It could well be a matter which sides makes better use of their chances and is more clinical in front of goal to emerge as the winner.

Both teams have been impressive of late at the back but we expect the floodgates to open in this one. Bar the 1-0 win for Everton over Chelsea last December, this fixture has seen at least two goals scored in the last four encounters. The Everton attack could stretch the Chelsea defence and we could yet see goals at both ends. At the end of it all, we could yet see at least three goals after 90 minutes. Bet9ja have 1.96 odds, Bet365 have 2.00 odds and 1xbet have 2.04.

Three out of the last four games have seen a winner and we expect that to carry on today as well. Thomas Tuchel has only drawn three out of his ten games in charge at Chelsea and judging from that, it’s safe to say the German manager could be out for another win. Everton have also won their last three league games and have only played four times this season, the least by any side in the Premier League top ten at the moment. Everything points to a winner today in one way. Bet9ja have 1.22 odds, Bet365 have 1.22 and 1xbet have 1.26.

Both Teams to Score: YES

Everton have found their swagger of late and have scored at least a goal in their last four league games. Chelsea have also impressed of late, scoring at least a goal in four out of their last five league games. We expect to see both teams score today and we already explained that it could be a game of who scores the most. Bet9ja have 1.99 odds, Bet365 have 2.00 and 1XBet have 2.10 odds.

The Frenchman was named on the bench against Liverpool last time out and could be deployed back in the starting lineup against the Toffees. Giroud has enjoyed a fairly productive spell under Tuchel and he could be among the top names to get a goal today. As always, his aerial prowess will once again come in handy for the Blues. Bet365 have 2.00 odds while Bet9ja have 2.35 for him to score.

The German continues to blow hot and cold in front of goal but remains a bright spark in terms of his movements off the ball. He has equally seen regular game time under Thomas Tuchel and his pace could see him emerge as one of the players that could score for Chelsea today. Bet365 have 2.50 odds for him to score while Bet9ja have it better at 2.75.

Richarlison might have scored only six Premier League goals this season but is one of the most in-form Premier League players at the moment. The Brazilian has scored at least a goal in his last four consecutive league games for Everton and he’ll be looking to carry on his impressive form today. There is immense value with Richarlison to score; Bet365 have 4.33 odds while Bet9ja have it better at 5.00.

Calvert-Lewin has not been at his prolific best of late but remains Everton’s top scorer this season with 13 goals to his name. A goal or two takes him back to being within touching distance of the top-scorer award and he’ll be fired up to find the back of the net as well. Value also comes with the Englishman as both Bet9ja and Bet365 have 3.50 odds for him to score.