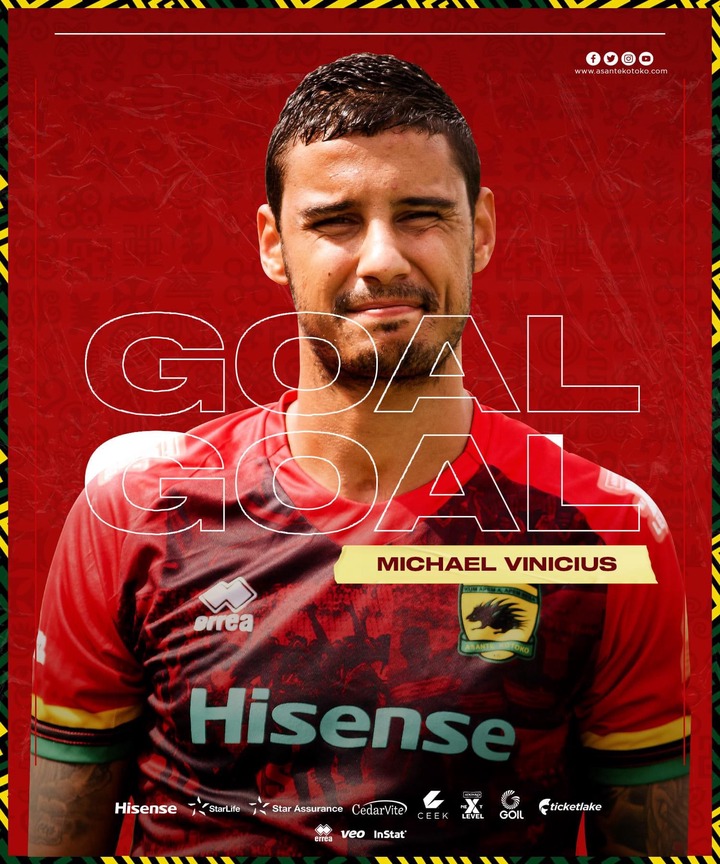 Asante have walloped Bechem United 4 - 0 to make a move towards the summit of the league table.

Fabio Gama scored his second goal of the season and assisted the first goal.

Michael Vinicius made his debut appearance and capped it off with a debut goal.

Francis Andy Kumi opened his scoring chart with a debut goal, following his transfer from division side Unistar Academy in mid-season.

Asante Kotoko and Bechem United had their way through in the early stages of the game. The latter pushed further for an early lead, but got their runs curtailed on few moments.

Andy Kumi latches onto Fabio Gama's through pass to bury the ball at the left bottom corner, but the goal would not count as the Assistant Referee already had his flag up for offside.

Few seconds to 10th minutes, Habib Mohammed soars the highest to connect his head to Imoro Ibrahim's cross, but heads a whisker of the upright.

Abdul Ganiu was set up by Fabio Gama via a free kick, and drove home a shot through the defence to get the opening goal for Asante Kotoko.

The goal brought stability into the play of the home side, Asante Kotoko. Bechem United labored for the equalizer, as Moro Salifu came close with a shot across the face of goal post three minutes after twenty, but Charles Mensah could not connect it.

After half hour mark, Charles Mensah made a skillful move into the penalty zone of Kotoko, but the defenders got a better of him, after which he appealed for a penalty.

With fifteen minutes to end the first half, Augustine Okrah found Fabio Gama, who did not hesitate to slot home his personal second and the second goal for Kotoko. Kotoko kept pouncing on Bechem United with begging chances.

The second half gave the chance for both sides to make amends. The two teams put together passes to warm themselves into the game.

Asante Kotoko got the upper hand as Francis Andy Kumi, formerly of Unistar Academy, made a connection with his head to hand Asante Kotoko the third goal of the afternoon.

With quarter of an hour left, Asante Kotoko maintained their dominance, as Bechem United left with no option of playing.

With 8 minutes left to the end of proceedings, debutant Michael Vinicius opened his scoring account with a debut goal. It took him 3 minutes to grab a debut goal.