Bruno: “I play to score and win against everyone”

By Powerbetsghana (self media writer) | 1 year ago

Bruno Fernandes is easily the best performing player for Manchester United this season after his goal tally and performances.

Fernandes has found the back of the net 15 times for United and his recent goal sent rivals Manchester City to their first loss in 21 matches. Most pundits have been scrutinizing Fernandes’ performances and stats when United are playing against the ‘Big Six’ team in the English Premier League. 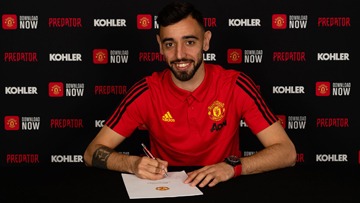 The attacker from Portugal has now hit back at those that are busy doubting his stats and performances by making a statement.

“I don't know what people mean by 'top six', because the teams are in top six in the table. I score and assist against some of them. I scored this season against Tottenham. But some people say penalties do not count!

And I want to do that - it is the most important thing. But as a player, I do not look for the big six or the rest of the league. I look for every game in the same way. And I think the league is not a sprint, it is a marathon. So, you do not have to score or win against the big six - you must score and win against everyone.” Bruno said to the media.

Manchester United are now second on the Premiership table and are now 11 points away from log leaders Manchester City. In the UEFA Europa League, they are scheduled to face Italy giant’s AC Milan on Thursday for the round of 16.

Bet on Manchester United with Powerbets for boosted odds: https://j.mp/3v0TJb0