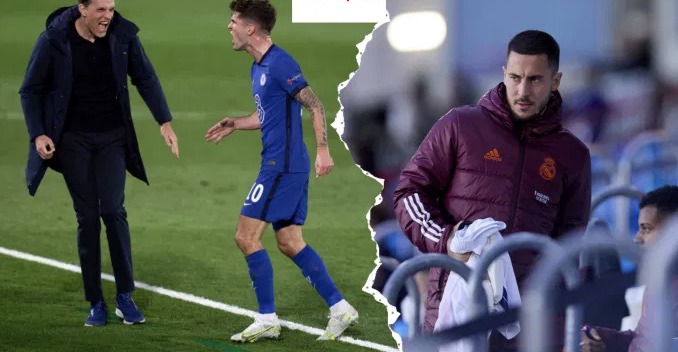 Pulisic returning to form has left many comparing the American to former Chelsea talisman, Hazard

Christian Pulisic provided Chelsea‘s only goal in their 1-1 draw against Real Madrid on Tuesday.

Having initially won the man of the match in the Quarter finals stage against F.C. Porto, Pulisic continued his impressive form.

The 22-year-old’s presence was so much felt that if not for N’Golo Kante’s involvement in the game, he would have been named man of the match.

Although this wasn’t the first game to push people into this mindset of comparing Pulisic to Hazard, it’s just a confirmation they could actually be compared.

Even with Eden Hazard coming on the pitch afterwards, Pulisic’s impact was very much still felt and Tuchel has stated the winger has to live up to expectations.

Speaking at the press conference today, Tuchel said; “He took his number so now he has to live with it!”

This insinuating, for having picked Eden Hazard’s number, Pulisic must be ready to shoulder every comparisons coming his way as fans would expect him doing better than his predecessor.

Chelsea have Fulham to battle tomorrow with hopes of extending their grip on the top 4 zone.