Cristiano Ronaldo and Jason Sancho scored as Manchester United beat Villarreal 2-0 to start life in the absence of Ole Gunnar Solskjaer on good note and also grabs their first Champions League away win of the season. 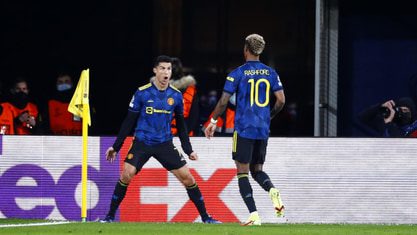 The newly appointed manager Michael Carrick made four changes to the line up that lost 4-1 to Watford last Saturday, having the Dutch midfielder Van de Beek starting ahead of the Portuguese Bruno Fernandes.

However, Villarreal begun flamboyantly, producing two great chances in the first ten minutes. A save from Man United goal keeper De Gea on Moi Gomez from the edge of the box and Yeremi Pino’s shot which hits the side netting.

In the second half, Manchester Utd begun building up play and taking the game to Villarreal with Bruno Fernandes and Jason Sancho showing showing great connection.

Talisman Cristiano Ronaldo was introduced to the rescue in the 78th minutes and broke the dead lock with a lobbed ball over Rulli to chalk his 140th goal in the Champions League.

Jason Sancho also got his name Regustered on the scored sheet with his first goal for the club to make it 2-0 in the 90th minute and to eventually wrap up an important win at Villarreal.