Who is Ralf Rangnick? Man United next interim coach

By Alirash (self media writer) | 7 months ago 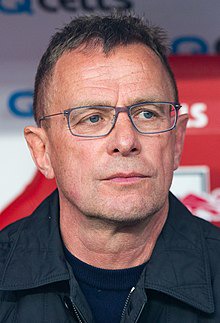 Manchester United parted ways with Ole Gunnar Solskjær last week after a forgettable performance away at Watford. It was the final nail in the coffin for the manager who had been walking a tight rope after the 5-0 loss at the hands of fiercest rivals Liverpool.

Michael Carrick was appointed caretaker for the the game against Villarreal,a game they won 2-0. Reports has it that Manchester United are close to appointing Ralf Rangnick as interim coach till the end of the season. But who is Ralf Rangnick and his coaching philosophy.

Rangnick is a German coach who most coached teams in his native Germany,he has coached teams such as Schalke, Stuttgart,Hoffenheim,RB Leipzig etc. who he famously brought from the 4th division to the Bundesliga and they are now a main stay of the Bundesliga and the champions league. He was the director of football for the Red bull teams who includes RB Salzburg and New York Red bulls.

He is credited with influencing coaches such as Jurgen Klopp and Thomas Tuchel with his gegenpressing approach to the game. Gegenpressing is a high intensity pressing game which keeps pressure on the opposition team to win the ball back quickly with incisive vertical forward passes,quick one two's etc. When discussing his philosophy with the coaches' voice, he said "as a coach, you need to have a very clear idea of how you want to play when you have the ball yourselves.

"Number two is what do you want to do if the other team has got the ball? What kind of gameplan do I give my players when the other team has got the ball? Our idea is clear. It's very, very similar to my coaching friend Jurgen Klopp. Our Red Bull football is heavy metal, rock and roll. It's not slow waltz. We hate square passes and back passes. Just having the ball ourselves doesn't make sense.

"Then, of course, we have the set-pieces. This is highly important. If 30 per cent of the goals are being scored after set-pieces, how much percentage of our training time should we invest in set-pieces? Thirty per cent."It's about putting the other team under pressure, no matter how high up. The higher up the better, but wherever the ball is, we try to win the ball back.

"Also highly important is 'rest defence'. No matter if you are playing two or three central defenders, they have to make sure that the one or two players the other team has up front are being marked. They have to be closely marked, because if we allow them to control the ball, then we get the counter-attack ourselves.

"This is nothing less than a train the brain issue. This is what we call 'rest defence' and it's a very important thing that you train this. Not only tell the player, but train it in the training sessions."

With this philosophy,it common knowledge that Christiano Ronaldo does not press so too Paul Pogba. It remains to be seen how he can get those players to player his kind of football.

It is no wonder Chelsea wanted to hire him in an interim basis after the sacking of Frank Lampard but he rejected it saying he's not an interim coach so why will he take an interim role at Manchester United? It is understood that he'll be given a role after his contract has ended.

Content created and supplied by: Alirash (via Opera News )