By Yawkyeinews (self media writer) | 8 months ago

Barcelona are back in action in La Liga this weekend as they lock horns with SD Huesca in an important fixture at the Camp Nou on Monday. The Catalan giants have been impressive in recent weeks and are the favourites to win this game.

SD Huesca have endured a difficult campaign so far and find themselves rooted to the bottom of the league standings. The away side has struggled to cope with the demands of La Liga and will need to be at its best to avoid relegation in the coming months

Barcelona have effectively recovered from a slow start to their league campaign and are giving Atletico Madrid a run for their money at the moment. The Blaugrana eased past Osasuna last weekend and will want a similar result in this match. 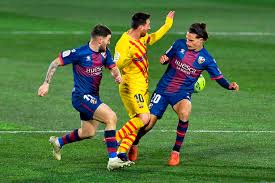 Barcelona have an excellent record against SD Huesca and have won four out of five games played between the two teams. SD Huesca have never defeated Barcelona in an official fixture and will need to take it up a notch this weekend.

The reverse fixture between the two teams took place in January this year and ended in a narrow 1-0 victory for Barcelona. Frenkie de Jong scored the winning goal on the day and will play an important role in this fixture.

Barcelona have been a resurgent force under Ronald Koeman in recent weeks and have flourished under their Dutch manager's innovative tactical system. The Catalan giants are still in contention to win the La Liga title and will need to maintain their winning streak this month.

SD Huesca, on the other hand, are likely to face an intense relegation battle in the coming weeks and will have to play out of their skins at the Camp Nou. Barcelona have better players in their ranks and should be able to win this game.