By Frankveli (self meida writer) | 22 days

Lionel Messi is an Argentine professional footballer who plays as a forward and captains both Spanish club Barcelona and the Argentina national team. He is considered as the best player in the world and widely regarded as one of the greatest players of all time, Messi has won a record six Ballon d'Or awards, a record six European Golden boot, and in 2020 was named to the Ballon d'Or Dream Team He has spent his entire career with Barcelona, where he has won 34 trophies. 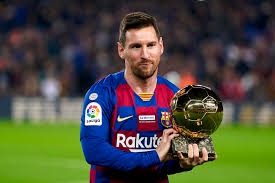 This article focus on some ten interesting facts about the Argentine star.

The Spanish Football Federation offered Lionel Messi to join the Spanish Football Team and he declined the offer. To stop further pursuits, the Argentine Football Association organized two under-20 friendlies just so that they can finalize Messi’s status as an Argentine player in FIFA.Messi holds passports for both Spain and his native Argentina.

Messi first contract with FC Barcelona was written on a napkin because there was no paper and the then Sporting director, Carlos Rexach wanted an immediate signature due to Messi’s unbelievable talent, not wanting to waste a single second.

﻿3. Messi's father was a steelworker.

Lionel Messi comes in a middle-class Italian origin. His father, Jorge, was a steelworker, and he also coached the local youth football team.

He was diagnosed with growth hormone deficiency, which was stopping his normal growth rate at a tender age of 11. His parents couldn’t afford his treatment of $900 per month. His father’s medical insurance could only cover two years of treatment, Messi’s father started looking for alternatives. He was scouted by Buenos Aires club, River Plate, but they couldn’t afford his treatment as well. Barcelona signed him and took care of him.

Although Lionel Messi is one of the most spectacular football players who has ever existed, and although he has won the Under 20 World Cup and an Olympic Gold Medal with Argentina, he is still struggling to win a major international trophy. He was close in 2014, 2015 and 2016, and will have another chance in 2022.

﻿6. Messi never watch highlights of himself.

Everybody loves to watch Lionel Messi but the Barcelona star once said that he never watch highlights of himself.

﻿7. Messi was nearly signed by Arsenal.

Arsene Wenger, the then Arsenal manager claims that after he successfully signed Fabregas, he tried to sign Messi when he was still young. The deal couldn’t succeed to his regret because Messi wasn’t willing to leave his club.

Ronaldinho recognized the greatness of Messi and told his teammates that Messi will be even better than himself. He soon befriended Messi and called him little brother. Messi’s first senior goal was assisted by Ronaldinho. Upon Ronaldinho’s departure in 2008, Messi was given the iconic number 10 shirt.

He is nicknamed ‘La Pulga Atomica’ which means ‘The Atomic Flea’ due to his fast, deadly, tricky style of play that collaborates with his small size to break defenders’ ankles. At just 20 years old, Messi received the nickname of “Messiah” from the Spanish media after his incredible performances.

﻿In the Copa Del Rey semi-final, he scored a goal similar to Maradona’s 1986 FIFA World Cup goal which is known as the Goal of the Century. He scored another in a similar fashion to Maradona’s “Hand of god” goal against Espanyol in a league fixture.