Andre Dede Ayew who plays for championship side Swansea City and captains the Ghana National team has been on a pretty fine form this season. He began his career in Ghana, playing for Nania FC, while debuting for the club at age 14. The 31 year old has also have a spell at top notch teams such as West Ham United, Fernabarche, Marseille, Lorient, Arles- Avignon just to mention a few.

He is the second-born son of three-time African Footballer of the year and FIFA 100 member Abedi Ayew “Pele” and has two brothers, Ibrahim and Jordan Ayew, who are professional footballers. In 2011 Ayew was named the BBC African player of the year and Ghanaian. The Ghanaian skipper scored his 15th goal of the season and helped his side Swansea City to beat Millwall 3-0 at the Den to revive their promotion chances.Swansea City currently sit fourth on the league log after losing four consecutive matches and are doing everything to ease off the pressure and win games to book their place in English Premier League next season.

Head coach of the side Steve Cooper was full of praise for the midfielder after their massive win against Millwall and these were his words “I thought we were a real attacking threat all game.I think Wayne (Routledge), coming into the team, was excellent, Andre has scored at a brilliant time, just before half-time, and he was a real nuisance for the Millwall defenders.He was taking up areas where he was perhaps not getting the ball, but he was dragging people out of areas to exploit spaces elsewhere”.He said. 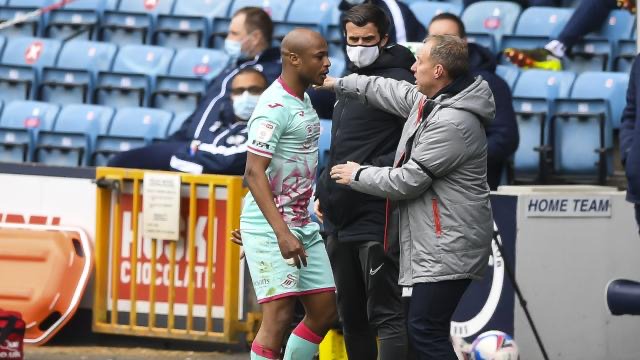 Swansea are in contention against Sheffield Wednesday who sit 23rd on the league log, in a relegation threatening zone and are looking forward to better it. A win for the swans will bring them back to the promotion zone with a chance of qualifying for the English Premier League next season.