By Alberto_Dunamis (self media writer) | 4 months ago

Tournament football has its own rhythms, its own laws. Switzerland and Spain were involved in two of the finest European Championships games on Monday, both of which went to extra-time, so everyone was rightly looking forward to their meeting in Russia this evening. Naturally, then, the first-half was functional at best. No shots on target from the Swiss, who were missing the suspended Granit Xhaka and then lost Breel Embolo to injury after 23 minutes. 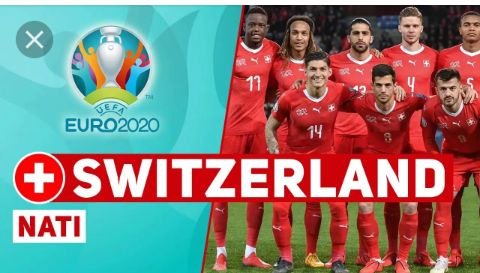 Only one first half shot on target from Spain, but by that stage they were already 1-0 up thanks to a goal from Euro 2020 breakout star Own Goal, who rattled home his 10th, assisted by Jordi Alba. That’s three own goals Spain have benefited from at this tournament. Sounds a lot, is a lot.

At half-time Switzerland’s top passer was Yann Sommer, which is not what you want from your goalkeeper. What you want is saves! (More on those later). Switzerland played well in the early stages of the second-half and justifiably equalised on 68 minutes through Xherdan Shaqiri, a man more suited to international tournaments than he is runs of consecutive appearances in the Premier League.

And talking of the Premier League, Michael Oliver, the English referee, pivoted the entire match in the 77th minute by sending off Remo Freuler for a tackle on Gerard Moreno. Was it a red? Yes, we saw Oliver brandishing the card. Should it have been a red? Maybe, maybe not. It was one of those/them. What it did do was turn the match into 40 minutes of attack against defence as Spain went: pass-pass-pass-pass-shot on target, oh, saved by Sommer.

Two shots on target in 90 minutes for Spain, eight in extra-time. That’s quite the increase. Yet none of them found their way past the increasingly godlike figure of Sommer, a busy man but also a calm man. His 15 saves in the knockout stages at Euro 2020 is the most by any goalkeeper in the competition’s recorded history. His teammates didn’t have a shot of any kind after their equaliser, but it wasn’t that sort of game. They had to hope Sommer would carry them to a penalty shootout for the second time this week, and he did. 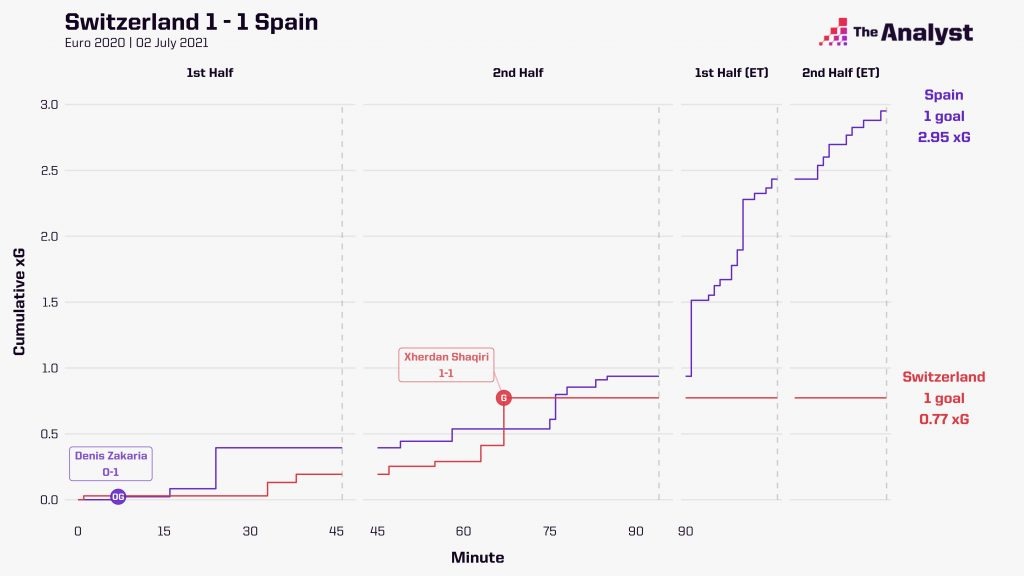 Looking at the xG race chart above it looks like Spain were robbed in the game but in truth the red card changed everything. Switzerland had earned their chance to win with spot-kicks after doing the same to France on Monday. They became the fourth side to go to penalties twice at one edition of the Euros, after England in 1996, France in 1996 and Poland in 2016. The three previous teams all lost their second shootout, but they didn’t have Yann Sommer did they? All would be fine.

All wasn’t fine. In one of the lowest quality shootouts seen in the modern game, Spain edged it 3-1, with Mikel Oyarzabal scoring the winning penalty. Switzerland actually failed to score a single penalty in their shootout against Ukraine in the 2006 World Cup, so this was theoretically better, but after entertaining everyone this week, their wait to reach a first ever semi-final in a major tournament goes on. Spain sneak through after scoring once from 28 shots, the most they’ve ever recorded in a tournament game. Our predictor currently gives them a 32.4% chance of winning Euro 2020 but if they are to do so they surely need to find a clinical finisher from somewhere.