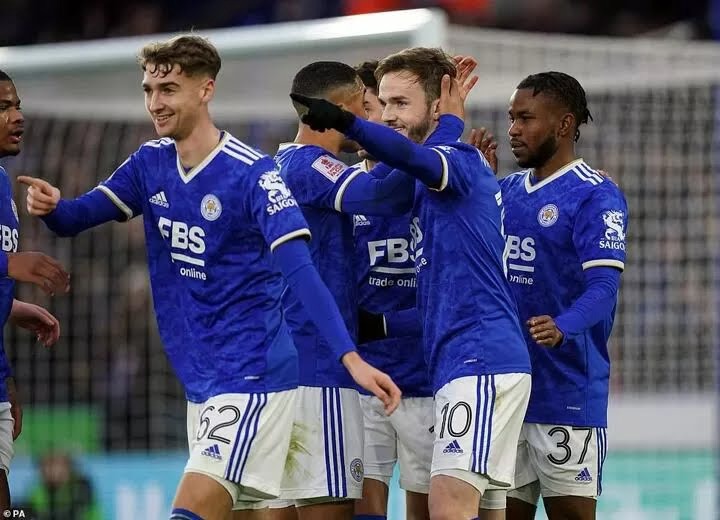 Brendan Rodgers was left with only eight senior outfield players due to illness, injury, and four men in the Africa Cup of Nations, with Jamie Vardy, Jonny Evans, and Timothy Castagne among a remarkable 17 players absent for the match against Watford.

Rodgers must have had some grim thoughts when the floodlights went out 11 minutes into the second half, soon after Harvey Barnes had placed Leicester 3-1 ahead.

He employed a winger at right-back, a midfielder in central defense, and a winger up front for this game, as well as handing Lewis Brunt his senior debut, starting in midfield before shifting to left-back.

With Everton on the horizon in the Premier League on Tuesday, Rodgers even rested captain Kasper Schmeichel, so the idea of having to reschedule this game due to a few shady connections would have been the icing on the cake.

Thankfully, the delay was only five minutes long, and Leicester is still in the running for the fourth round. They went ahead by two goals before the half-hour mark, thanks to Youri Tielemans' early penalty and Maddison's dink, only for Joao Pedro to equalize almost immediately.

Watford's challenge faded after Joao Pedro hit the underside of the bar with 20 minutes remaining, and Marc Albrighton scored the fourth late on.

Claudio Ranieri, Leicester's 2016 champion manager, will be dissatisfied. Watford did not take advantage of this opportunity, despite the fact that with games against relegation rivals Newcastle, Burnley, and Norwich on the horizon, he would have been happy to write this one off.

Because, despite their problems, Leicester still had some of their top attacking players available, including the exceptional Maddison, who scored the game's first goal. His sixth-minute corner was directed towards Jannik Vestergaard, who was taken down as he attempted to meet it by Francisco Sierralta.

Even though Daniel Bachmann ran the wrong way, Mike Dean pointed the spot, and after a VAR inspection, Tielemans found the bottom-left corner. In last year's Final, Tielemans scored the game-winning goal as Leicester made history by defeating Chelsea, and he continued where he left off in this year's campaign.

When Maddison took a swift throw-in to Barnes in the 22nd minute, Leicester should have made it two. The winger beat Craig Cathcart to the ball and fired it low across goal, where a genuine striker would have tapped it in.

Soon after, Maddison completed a fantastic move to give the Foxes a two-goal advantage. Albrighton, who was playing as right-back, found Ademola Lookman, who passed the ball to Maddison, who comfortably hoisted it over the oncoming Bachmann.

Leicester were in complete control at the time, but they were stunned a minute later when Watford scored with their first shot on goal.

Cucho Hernandez and Ashley Fletcher took advantage of some sloppy Leicester defending, allowing Fletcher to hook the ball through for Joao Pedro, who matched Maddison's finish.

When Leicester's Vontae Daley-Campbell was not sent off for a body-check on Hernandez, the Hornets were unhappy with Dean. Daley-Campbell had previously received a yellow card for a foul on Jeremy Ngakia, but he persisted on continuing.

Ngakia eluded Daley-Campbell again in first-half stoppage time, setting up Hernandez for a shot that Hamza Choudhury, a midfielder playing at centre-back, blocked off the line. Daley-Campblell did not return for the second half, as expected.

Maddison had the opportunity to restore the home side's two-goal advantage almost immediately, but he took too long after being picked out by Albrighton. At the other end, Ozan Tufan missed a fantastic chance, while Joao Pedro was denied a penalty after collapsing under the pressure of Albrighton and Brunt.

At this point, Leicester became uneasy as Watford suspected an equalizer. Rodgers' soldiers, even when reduced, are still extremely deadly.

Lookman, on loan from RB Leipzig, was found by Maddison with another clever pass, and the on-loan midfielder p

ut over a superb cross.