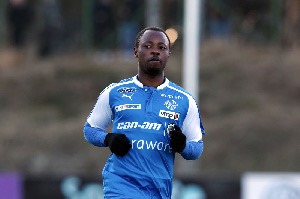 FIFA U20 World Cup victor Ransford Osei has pledged not to permit any of his kids to address Ghana at any level in football.

The previous Asante Kotoko forward reported his retirement from football on Monday at age 30.

Ransford Osei had a promising vocation during his young days as he turned into a commonly recognized name following his endeavors at the FIFA U-17 World Cup in Korea where he scored five objectives in the competition.

Ghana completed fourth in the competition in the wake of losing to Germany in the third-place game.

He was essential for the Black Satellites crew that won the WAFU, CAF U-20 and the FIFA U-20 World Cup in Egypt in 2009.

Osei assumed a critical part in those competitions, scoring four objectives at the FIFA U-20 World Cup.

After the World Cup competition, Ransford Osei's vocation experienced a plunge in spite of his enormous potential as he neglected to make the cut in Europe and in his nation of origin.

In a meeting to report his retirement with Humble Ike on YouTube, Ransford Osei clarified why he has taken the choice not to permit his youngsters to address any of Ghana's public groups.

As indicated by the previous striker, the current framework set up doesn't compensate footballers who are meriting call-ups. Hence, he will guarantee his youngsters have nothing to do with Ghana.

Osei, after U-20 World Cup, was given a Black Stars a call-up and was important for the group that won silver at the 2010 Africa Cup of Nations competition in Angola yet couldn't get a spot in the crew for the World Cup in South Africa.