By Jaradmoxley (self media writer) | 1 year ago

Manchester City is playing against Liverpool today and this is so far the biggest match in the history of English Premier league. This is because both teams are the best and have been leaders all over again. Last year Liverpool won the EPL from the champions Manchester City, and this has made them rivals. In the first half of the match Fabinho gave the blues penalty, and this was supposed to be their chance to lead the game but their penalty taker Gundogan spoilt the penalty. 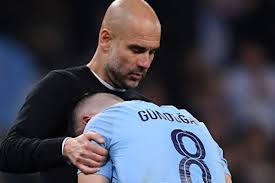 After his sudden lost, the head coach Pep Guadiola criticised the actions of his player. He signed that was the only chance we got to make an impact but he spoilt the ball. Sterling asked him to give him the ball to play it but he didn't. This is has made the fans and team mate very furious about the behavior of the player. Most of them are shouting for him to leave the club because he had some issues lately in the team. Many are also calling for him to be sold and this seems that the fans are fedup from him.

Content created and supplied by: Jaradmoxley (via Opera News )