By Agyapong11 (self media writer) | 2 months ago

Despite Jamie Vardy's return from injury for the Foxes, Leicester and Aston Villa play out a boring goalless draw in a Midlands derby at the King Power Stadium. 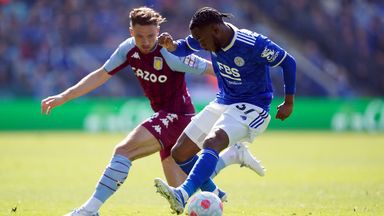 As Jamie Vardy's return from injury ended in a drab goalless tie, Leicester and Aston Villa played out a dreary goalless draw.

Both teams controlled spells of the King Power Stadium match in a dull Midlands derby, but a lack of a cutting edge in the final third meant they had to settle for a goalless draw.

In the first half, Leicester's James Maddison came closest with a free-kick from 30 yards that went just wide of Emiliano Martinez's goal, while Villa replacement Emiliano Buendia curled wide late in the game.

Vardy's return in the 70th minute was a plus for the hosts, but the Foxes' star was little engaged in the game's final exchanges.

Injuries were also avoided by Brendan Rodgers' Leicester squad ahead of their Europa Conference League semi-final clash with Jose Mourinho's Roma on Thursday.

It was Villa's fourth consecutive game without a goal from open play, with Leon Bailey and Ollie Watkins joining Buendia in failing to take advantage of decent opportunities.

Content created and supplied by: Agyapong11 (via Opera News )